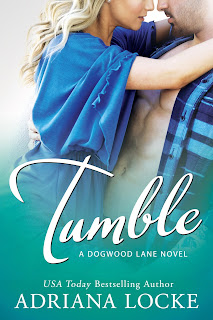 When Montlake Romance invited me to read and review a digital galley of bestselling author Adriana Locke's upcoming Dogwood Lane series back in December, it was a no-brainer for me to say "yes." I’ve yet to read all of Locke’s books, but the ones that I have had the pleasure of reading—her Landry Family and Gibson Boys series plus Lucky Number Eleven standalone novella—the importance of family and community is something that’s highlighted, and the same goes for Dogwood Lane series starter Tumble.

This second-chance romance does what it’s supposed to: it gives readers a sweet and sassy love story while also introducing us to the cast of characters that will be recurring throughout the series as well as showcase just what makes this small town in Tennessee so special. Book one is headlined by exes Dane Madden and Neely Kimber. He was the captain of the baseball team and she was the star gymnast, but their relationship ended after high school and any chance of getting back together ended with betrayal.

I liked Neely but I loved Dane. Yes, he did what he did, but as much as he regretted hurting the one girl he’s ever truly loved, he was blessed with the greatest gift of his life because of it. Having been away from Dogwood Lane for a decade had Neely more of a city girl, one who had a good life in New York, but you could still see bits and pieces of the country girl she once was. I appreciated that neither one of them was this beacon of purity and virtue. I like it when my main characters are perfectly imperfect human beings.

As always, Adriana Locke penned a heartwarming romance with a good amount of heat to it. The supporting characters were all standouts, but the one who stood out most was definitely Mia. I won’t say who she is and what role she plays in the lives of Dane and Neely, but she was such a ray of sunshine. There were parts that made me smile and some that had my heart clenching in empathy, and by the end, Tumble had me sighing in satisfaction and very excited to listen to my pre-ordered audiobook. Five stars! ♥