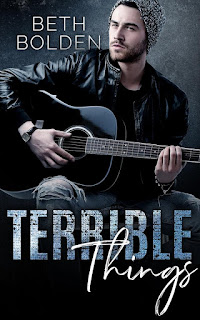 I've read and liked the currently available books in Beth Bolden's Kitchen Gods series, but I dare say that her latest release--one that I hope will be just the first in a new series featuring a fictional pop band that broke up when one of them upped and left without a word for five years and then brings up the possibility of suing his former band members if they don't agree to finish out the tour they were on before everything imploded. Okay, that sounds way more complicated than it actually is and that particular band member isn't really the asshat that he may seem to be given what his return could signify. The five guys that make up Star Shadow all appear to have a story to tell, but for this particular book (again, fingers crossed this is a series starter), it's a second-chance romance between twenty-six-year-old band guitarist Leo Humphries and twenty-five-year-old Caleb Chance, both songwriters as well.

Terrible Things introduces readers to Leo Humphries just as he's about to find out that Caleb Chance has not just been spotted but wants to meet up with the four band mates he left behind five years ago. The fact that Leo and Caleb are also ex-boyfriends makes this reunion even more heartrending for all parties involved. The two may have been together friends and then lovers for four years, but they were apart for more than that. There's a lot of anger and hurt simmering within Leo, which is why he's a wee bit hurt that his other band mates and closest friends--Benji, Diego, and Max--seem to welcome Caleb with open arms after just a hunt of hesitation. Caleb pushes for the band to reunite and finish out their last tour, and Leo is scrambling to dealing with wanting to push his ex away while also wanting to touch him and being in close constant proximity of each other for the duration of the reunion tour. Caleb wants a second chance but giving him that mean a second chance for Leo's heart to shatter once again.

I absolutely loved this book! From the second-chance aspect to the angst to the brotherhood amongst the five guys who make up Star Shadow to Leo's ties to his mother and younger brother, there wasn't much that I could really find to complain about. I really liked Beth Bolden's writing here, and since I've read a number of her past releases, it feels as if she's raised the bar with this standalone. There's a crispness and constancy to the writing itself and the flow and pace of the story as well as the development of the characters. This was a slow-burn second-chance romance, and for all intents and purposes, I loved that slow burn, but it did feel like it was dragging a bit near the end, with the whole back and forth between Leo and Caleb. That's actually the only reason I didn't give this book five-plus stars. But I fell for the overall story and Leo and Caleb; that being said, I also have my curiosity piqued regarding a couple of other couples in the making, and here's hoping Star Shadow won't just be the name of the band but the title of a series too! Terrible Things receives five stars and is my favorite Bolden read. ♥