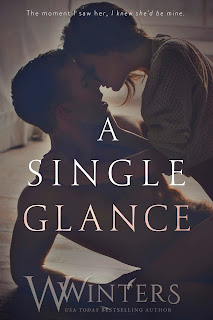 Well, now... That's what you call an introduction to a new-to-me author. After I was done reading A Single Glance--my first ever read from W Winters--I was officially torn between wanting to hug my tablet or wanting to shake it. The former was for the first 99.9% of the book and the latter was for that 0.1% that had that evil cliffhanger. GAH! Of course Winters had to write a story that had me hook, line, and sinker, and now I'm going to have to wait a couple of months before my curiosity is satisfied. Why, oh, why would you do this to me, W Winters?! Here I am, absolutely emotionally invested in all things Jase and Beth, so while I won't be doing so patiently, I shall be eagerly--DESPERATELY!--awaiting the arrival of the sequel to this fantastically awesome romantic suspense opening salvo.

I won't be giving too many details since spoilers are even more evil than cliffhangers, especially when it comes to connected books in a series AND when it's under the romantic suspense sub-genre. I will, however, give a few crumbs of information to give those who have yet to read the book a basic idea of who the story involves and what may--or may not--be going on. We've got Jase Cross, owner of a bar called The Red Room, and Bethany Fawn, a nurse at Rockford, a mental facility for youths. Beth puts herself in his cross hairs when she goes looking for answers regarding her late older sister, and Jase and his brothers are the ones at the top of her list of suspects as to what happened. He offers her a compromise of sorts, and she's left with no choice but to reluctantly agree to it all.

Prior to reading this book, W Winters was an author whose name and work I'd seen in passing, whether it book sites like Goodreads and BookBub or online e-retailers. I had yet to read anything of hers because when I did take notice of her, she already had an ongoing series, and I'm not a fan of jumping in the middle of series that are already a few books in. And then A Single Glance came along. The blurb intrigued me and I decided it was the best time to finally see if the author's writing merited the hype I'd read online. My verdict? Yes, indeed, she deserves it. I'm not saying she gets nothing but rave reviews--no author does--but a vast majority of the reviews out there do point out her talent for putting her proverbial pen to paper and for having her readers keep coming back for more.

Clueless me had no idea Jase and Beth's story was part of a larger universe. A quick peek at the author's Amazon page gave me a reading order that I now have jotted down on one of my notepads. But here's the thing: this book actually works as a standalone because while I was curious about one of Jase's brother and the guy's fiancée, this was very much all about Jase and Beth and the intrigue swirling around them. Winters knows how to weave the sort of tale that has you sitting up straight and paying attention, and while I love books that I can lean back and relax with, I live for those that have me on the edge. This book? It was...everything. There's a cliffhanger, but I'm going to use the time wisely by catching up on this insanely addictive universe A Single Glance is part of. Five stars. ♥