Review: She Found Him by B. Cranford 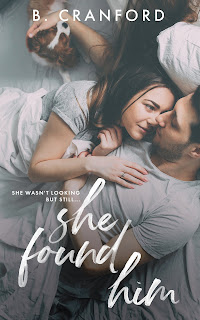 I read B. Cranford's first three releases--The Brightest Star, A Little Bit Crazy, and About Time--but it's been a while since I last read anything by her, an oversight that I hope to rectify this year by doing a bit of catching up on everything I've missed between then and before her most recent novel. It's this very book that reminded me why I fell in love with this author's writing in the first place, and if you're new to B. Cranford, She Found Him would be a great way for you to dive in. This standalone is a lighthearted contemporary romance that pairs a twenty-eight-year-old financial manager from Melbourne, Australia with a thirty-four-year-old veterinarian from North Carolina, USA. There also happens to be a four-legged, furry cutie with the name of Wilbur, aka Wilby, who's a scene-stealer.

Rose Riley down to her last few months in the United States before her visa runs out and she flies back to Australia. The last thing she needs is to become attached to anyone or anything, but then she didn't count on rescuing a brown and white pup nor did she expect to come face-to-face once with Liam Wood, the man she swung her sign slash baseball bat at--the same man who turned out to be a vet. Soon enough, Rose loses her heart to the furball she's named Wilbur and the man who's nicknamed her "Babe" for Babe Ruth. She's quickly become Liam's Rosie, but with the clock ticking on her time in the US, what hope do either of them have for their relationship to survive her departure, what more the long distance? Now that she's found him, will she end up losing her heart anyway?

This book was pretty much an angst-free read and was more sweet than steamy, not that I'm complaining since I don't require my romance reads to be drowning in angst nor do they need to have a whole lot of scenes where the characters get down and dirty, so to speak. Rose and Liam were easy to like and their relationship was just as easygoing. The main complication to their happily-ever-after was, of course, the fact that Rose was an Australian citizen, and I thought that the resolution to that situation was going in one direction before I was surprised to flip to another chapter and saw that it had gone another way. Me being the dog lover that I am couldn't resist Wilbur, and this pup stole my heart. She Found Him is the sort of read that would work well this weekend. It gets five stars. ♥

Learn more about B. Cranford.

Purchase She Found Him on Amazon | Apple Books | Kobo.