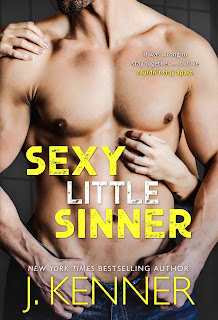 Bestselling author J. Kenner brings us back to the world of Blackwell-Lyon, and now, we've got the story of the third co-owner of the security company, forty-year-old Connor Lyon. His twin brother and their best friend have both found love, and Connor's found a woman who owns him, body and soul, heart and mind as well. Unfortunately, Connor ends their relationship a year in for two reasons: Kerrie Blackwell is his best friend Pierce's younger sister, and she happens to be fourteen years younger than him. They had a wonderfully beautiful year together, but Connor believed that the odds were against them. A year after their break-up, Kerrie and Connor have maintained a strong friendship but a far stronger connection between them still exists, no matter how much Connor thinks breaking up was the right thing to do. An undercover assignment has the two pairing up to partake in kinky activities. Things become even more heated, and painful choices need to be made, but when Kerrie's life is put in danger, will Connor still be able to pretend that his feelings for her are only that of a friend and a pseudo brother?

Sexy Little Sinner opened with a bang, and I'm talking about the sexy, dirty kind of bang, although I'm pretty sure both Connor and Kerrie experienced their own explosive sort of reactions. There was denying the sexual chemistry between the two, although I would have wanted an equal amount of romance as well. Connor and Kerrie seemed to be good people, but there were moments where I felt that Kerrie was being a bit emotionally manipulative, doing and saying things in order to spark some sort of reaction that was anything but platonic from Connor. Maybe it was just me, but that's how I felt, like she was pushing Connor's buttons so that he would finally cave and simply tell her that he wanted her back in a far more intimate way. With regards to Connor, well, let's just say that his actions spoke waaay louder than his words, and there was no doubting that he really did care about Kerrie and that he should have fought for her and their relationship instead of breaking both their hearts. The suspense aspect of the book was minimal, but it was definitely one of my favorite things about Sexy Little Sinner. Four stars! ♥