Review: The Risk by Elle Kennedy (Briar U #2) 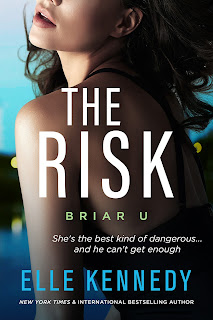 Note: An advanced reader copy was provided by the author via Bocci PR.

Melodic laughter spills out of her throat. I can't deny I like hearing it. No, I like knowing that I'm  the one who made her laugh. This beautiful, bitchy girl with the prickliest attitude I've ever encountered, who doesn't miss an opportunity to neg me.

The Briar U series just got a whole lot better--and that's saying something considering I already liked the first book! Elle Kennedy's raised the bar with two main characters from rival schools who go from hate to lust to maybe-sorta-kinda like. The Risk pairs Briar University junior Brenna Jensen with Harvard University hockey team captain Jake Connelly. In order to make it to the Frozen Four, both universities consider the other their biggest roadblock. Throw in a mutual hatred between their respective head coaches, and the two teams are feeling their school spirit even more in their quest to defeat the other. So, it certainly wouldn't make any sense for Brenna to seek out Jake. She's the coach's daughter and happens to call some of the players and their girlfriends close friends. However, desperate times call for desperate measures and she wants an internship at HockeyNet desperately enough to ask Jake to be her fake boyfriend since the misogynistic head honcho has a hard-on for the future Edmonton Oiler. He agrees, but in exchange for every fake date, Jake wants a real one with the only girl he cannot stop thinking about.

Brenna was one of those unforgettable supporting characters in The Chase that I just knew would give whomever she was pitted against, erm, paired up with a run for the money. She needed a guy who could take whatever sass she threw his way and he would lob it back at her with a cocksure smirk on his face. Cue Jake, and this guy was unapologetically confident about his skills on and off the ice and rightfully so. These two had sparks galore and their banter and bickering made for entertaining exchanges but their heart-to-heart conversations also highlighted that there was a whole lot more going on between them than merely their chemistry between the sheets (though, to be fair, sheets weren't always present nor necessary). While the first Briar U book had a dash of angst to it, this second one certainly had more courtesy of Brenna's back story, and well, me being the angst addict that I am, I was a very happy camper. It was easy to lose myself in Elle Kennedy's writing, and The Risk surpassed any and all my expectations, which basically also means that the third book has one heck of a tough act to follow. Five-plus stars. ♥