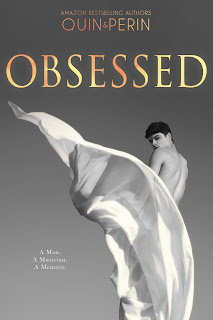 Note: An advanced reader copy (ARC) was provided by the authors via Foreword PR & Marketing.

I read the first three installments of Obsessed late last year, and I decided to go ahead and re-read everything as part of the Obsessed novel, which is basically all four of the installments plus a couple of bonuses included. The writing duo of Quin and Perin is one that bears noticing because these two clearly know how to write M/M erotica and write it well. With a BDSM slant to it and a whole lot of sex, this may appear to not have any sort of romance at all--and the authors did remind readers early on when the story was still being released in installments that there was, indeed, a lack of romance--but there is a hint of it in the book, or at least, I considered it quite romantic.

Obsessed is the story of Meik Lennen, a man who doesn't do love. He's all about pursuing his lustful desires and achieving more than satisfactorily with whoever happens to catch his fancy for the moment. When he spots a young busker on the sidewalk, Meik decides to request a song from him, which turns into something for more along Meik's alley. Once he's gotten a taste of Sebastian, Meik wants more, but that doesn't mean he wants a relationship. Sebastian is nothing more than a vessel for Meik to release his sexual desires on. So why is that he's grown increasingly obsessed with the musician? He needs to let him go before painful memories engulf him again.

The sex is hot, but there IS a story beneath all of the sex that happens between Meik and Sebastian. In the beginning, it's easy to peg Meik as an unfeeling jerk who treats Sebastian terribly, but once those bits and pieces of his past come to light, I had a better understanding of why he was the way he was. He did have a heart, but in the past decade or so, he's kept it hidden away. I liked how Meik developed as a main character and how he was able to redeem himself and find absolution. I loved the bonus content included in this bundle because it provided more perspectives. If you like your stories smutty but with some substance, check out Obsessed, which receives 4.5 stars. ♥

Learn more about Quin and Perin.