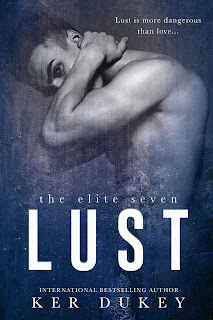 Bestselling author Ker Dukey's Lust kicks off The Elite Seven, a multi-authored series, and it also serves as my introduction to Dukey's writing. When I first saw the information packet for the series, I had a feeling that the main characters involved in this secret society were going to have anti-hero leanings. We do get peeks at the six other young men who become the latest inductees into The Elite--some getting longer looks than others--but basing it on the main character in this series starter and his best friend who is more peripheral than supporting character, there are, indeed, anti-hero feels, but I'm preeetty sure there are a host of reasons why they've become that way.

This first book is the story of Rhett Masters, a guy who had the sort of life many others who weren't as privileged envied. And then life took a turn when he experiences an unexpected loss--a loss that he carries a massive amount of guilt over. It's that guilt that makes him spiral out of control and makes him focused on gaining vengeance, but in order for him to achieve the latter, he'll need the help of a group, one that's been whispered about and whose existence he's seen evidence of. When he gets into the college where The Elite gathers each new set of seven inductees, he'll do anything to become a part of it. However, one was earn his spot in The Elite, and while the task given for his initiation is something he's able to do, will he be capable of doing it when it involves Chastity Griffin?

Rhett's story wasn't as dark as I expected it to be, but that doesn't mean that I didn't enjoy it. I quite liked how quick the pacing was for this book, and how there wasn't a whole lot of time wasted on unnecessary meanderings for any of the characters. Everything that we see of Rhett here is part and parcel of the person he's become since the incident that changed his life. Yes, he came off as somewhat of an asshat more than once, but the guy was broken, and while there was no excusing a lot of his bad behavior, I couldn't help but empathize with him. I think that Chastity was exactly what he needed at that point in his life because he seriously needed an anchor. Thank goodness this girl had strong backbone and that she gave as good as she took. I really liked reading their story, and that ending has me ready to get my greedy hands on the next book in the Elite Seven series. Lust receives 4.5 stars. ♥