Review: Lessons From a One-Night Stand by Piper Rayne (The Baileys #1) 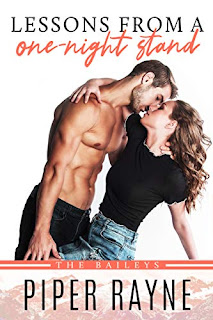 I love Piper Rayne's writing! This writing duo has never failed to make me laugh out loud with the humor they inject and then have my heart clench in empathy for the more angtsy moments. The romance and sex are a given and that wonderful balance between sweet and steamy is always present. I've read all of the books this awesome twosome has released, and now they've got a brand-new series and it isn't their usual trilogy either! Nope, The Baileys is about a set of nine siblings--Austin, Savannah, Brooklyn, Denver and Rome (twins), Kingston, and Sedona and Phoenix (twins)--who were orphaned after a snow mobile accident took the lives of both their parents nine years prior. Set in their hometown of Lake Starlight, Alaska, the series kicks off with the eldest among the brood, thirty-year-old Austin, the brother who put what was left of his family ahead of any and all of his personal dreams.

The Baileys hold a place of honor in their small Alaskan town, with Austin seen as the head of the family who shouldered the responsibility of making sure his younger siblings were okay after the devastating loss of their parents. Nine years after, Austin is ready to make a change and re-start those plans he had for himself before everything changed. The high school biology teacher slash baseball coach could be headed to California for a collegiate coaching job, and the last thing he needs is to piss off the interim principal, thirty-year-old Olivia Radcliffe. He had no clue that the Principal Radcliffe he was giving an off-the-cuff introduction to during the first school assembly of the year was none other than Liv, the woman he shared a very hot encounter with in the backseat of his Jeep. Hooking up with her may sound like a bad idea, what with him heading for California at the end of the school year, but Olivia's stay in Lake Starlight is temporary since she calls Florida home. So, why not have fun in the meantime and make some happy memories together, right? It's all well and good...until they fall in love.

No one does entertaining banter between main characters like Piper Rayne does. There's a lot of back and forth in terms of dialogue, and I have yet to get tired of it, given that I've read all of this twosome's books. Austin and Olivia are flawed individuals, and while I admit that there were times that these two frustrated me with their jumping to conclusions and lack of communication, they were simply too endearing for me to resist. They were human and made mistakes and had missteps, and that made them feel real to me. Austin and Olivia's romance takes center stage, but we also get bits about the rest of the Bailey siblings as well as a few side characters who seem to have potential in terms of being partnered up with them. I loved the humor here, and I certainly loved that this had more angst--at least that's how it felt to me--compared to the authors' earlier stuff. Lessons From a One-Night Stand exceeded my expectations--and earns five out of five stars--and I look forward to reading book two in March. ♥