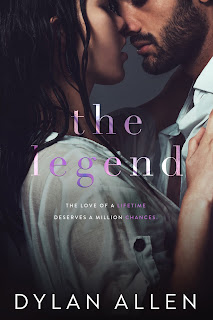 I’d heard and read good things about Dylan Allen over the past year, so when the opportunity to participate in the release blitz for her then-upcoming new release came along, I knew I’d be nuts to miss it. The Legend is the second in Allen’s Rivers Wilde series, which is basically about two feuding families, the Riverses and the Wildes. After reading the first book, The Legacy, in preparation for this latest book, my expectations had risen exponentially, and now that I’m done reading The Legend, I’m happy to say that those expectations were met, and now I’ve added some of the author’s back list on to my already never-ending to-be-read list as well as any and all of the upcoming books in this fab family saga of hers.

When they were thirteen and fourteen, respectively, Kalilah Greer and Remington Wilde met for the first time and made an impression on each other. When they meet again, it’s beginning of a whole new sort of relationship, one that meets an end neither one of them could have seen coming. A second chance comes along but choices were made that led Kal and Remi to drift further apart until a scandal years later has their paths crossing once again. Kal is looking for a story and Remi is looking for solace, but when painful truths make themselves known, will it bring the two erstwhile lovers closer or push them apart?

Ah, second-chance romances are my jam (does anyone actually still use that term?), and Kal and Remi’s love story was like Fate telling them that their time would come but they would need to withstand anything and everything that was going to be thrown at them. There were times that I waffled as far as my view of Kal was concerned because her motives for seeking Remi out were, well, suspect. She did, however, have me amending my opinion of her, especially after Dylan Allen delved deeper into who Kal really was, and ditto with Remi and their story. While this is the second book in a series, I think it fared well as a standalone that you could read it without having read series starter, The Legacy, first (but read it anyway because it’s a fantastic book). Five stars for The Legend, and I can’t wait for more Rivers Wilde. ♥

Purchase The Legend on Amazon.