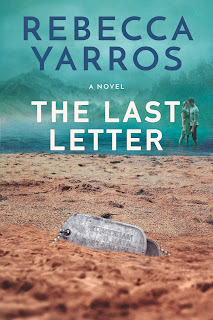 “I will show up for you. For Colt. For Maisie. I will not walk away. I will not abandon you. I will not die.” His words his me smack in my heart with the force of a ton of bricks. “I will show up, and if you don’t believe me now, that’s okay. I’ll earn it.”

“I have no right to expect that of you.” We weren’t together, or anything else that would even imply he had any such obligation. I had to trust that his sense of duty to my brother was strong enough to hold him here, and trust wasn’t one of my strong points.

“You have the right because I give it to you.”

Late in October of last year, I received an unexpected invitation from Entangled Publishing to read and review a novel which was set for release for February of the following year. All I needed to see was who the author was, and I immediately knew turning this humbling offer would have been a grievous mistake. The book was none other than The Last Letter, and the author just happened to be one of my all-time favorite go-to authors: Rebecca Yarros. This was already a much-anticipated read because Yarros’s last release was back in August of 2017, so fans and readers were more than eager to have something new from this gifted author. After reading this much-touted and already much-loved new military romance standalone, I can safely say that the year-and-a-half-long wait was more than worth it because this novel is, without a sliver of hesitation nor a shadow of a doubt, one of the most heartrending yet hauntingly inspiring reads you will ever experience. A word of warning, though: Have tissues on hand. Lots of them.

I know I just called The Last Letter a military romance, but it’s so much more than that. At the urging of her older brother Ryan, twenty-four-year-old single mother and bed and breakfast owner Ella MacKenzie begins corresponding with Ryan’s best friend who goes by the call sign “Chaos”. The two create a bond with each other through the letters they exchange, but that all abruptly ends on Chaos’s part after Ella receives news that Ryan was killed in action. Three months after laying him to rest, a guest arrives at Solitude, Ella’s B&B in Telluride, Colorado: twenty-eight-year-old special ops soldier Beckett Gentry and his dog, Havoc, and he informs her that he’s there upon Ryan’s final request in his last letter. Beckett is there to help Ella with anything and everything that she may need and while that list is not overly long, it is overwhelming. However, Ella isn’t the type to ask for help and she isn’t keen to turn to someone she doesn’t know at all. The thing is, Ella does know who Beckett is, but will he ever admit to truth to her?

I have all of Rebecca Yarros’s books in eBook format, but not once have I ever pre-ordered any of them…until The Last Letter. I bought her previous titles when they were on sale for 99 cents, and the most I’ve ever spent for ANY eBook is $3.99…until The Last Letter, which is the most expensive eBook I’ve ever bought at $7.99. I’ve also never pre-ordered a paperback online…until, you guessed it, The Last Letter. Yup, you read that right: I pre-ordered the eBook AND the paperback (which will also be my first ever Rebecca Yarros paperback!), and had the audiobook been up for pre-order, I would have undoubtedly pre-ordered that format as well. Why? Because this title is worth the money I just paid for it, and while it may seem silly to some that I have different formats for ONE title, I’m one of those people who appreciates varying experiences when it comes to fiction. And fine, I admit it: I’m a self-confessed fangirl and a certified Flygirl (you’ll only get that latter part if you love Rebecca Yarros as much as my fellow Flygirls and I do).

The Last Letter isn’t merely about Beckett and Ella’s journey as a couple; it’s also Beckett’s and Ella’s journeys as individuals trying to find their footing in a world that seems to keep eroding beneath them. It’s also about the journey that Ella’s twins, six-year-olds Colton and Margaret—aka Colt and Maisie—experience and the maturity and courage that these two have was awe-inspiring, reminding me of the most important thing I discovered when I was still a preschool teacher: adults can learn a thing or two (and much more) from children. My heart broke and mended and then shattered while reading this book, and by the end, it was slowly healing—and that’s what this story was about, at least in my eyes: healing. Beckett, Ella, Colt, and Maisie were tried and tested by things beyond their control, and while there were numerous things I took away from their story, the most notable is this: life is a journey and no matter where it takes you or how long it lasts, make the most out of it—make it count because you are enough.

Three final things about The Last Letter: it gets an infinity amount of stars, it’s one of the most remarkable stories you will ever read, and if you didn’t know this before, take note: Rebecca Yarros is one hell of a gifted storyteller. I may not be able to choose just one thing about this book that I loved most, but if I was asked to choose one book of any genre I’d encourage any reader to pick up this year, it would be this one. ♥