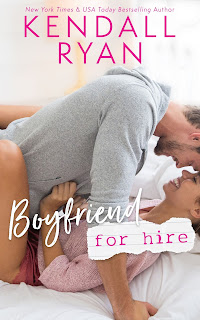 Penned by bestselling author Kendall Ryan, Boyfriend for Hire is the story of twenty-eight-year-old Nicco Evans, the titular character of this new contemporary romance. Nic is an escort and he's good at what he does. He's been doing this for six years, enjoying the benefits but also knowing that this isn't what he plans to do with the rest of his life. For now though, he intends to keep his clients happy and representing the agency he works for to the best of his abilities. His latest client is different, though. For starters, Elle wasn't the one who booked him; it was her soon-to-be sister-in-law in hopes of lessening the sting of having Elle's ex-boyfriend and the guy's current girlfriend at the wedding as well. The one caveat in the whole arrangement is that Elle cannot know that Nic is an escort. Everything goes swimmingly; that is, until Nic breaks one of his rules. He's developing very strong feelings for her, and it looks to be mutual, but will Elle still want to be with him once she finds out what it is Nic does for a living?

Boyfriend for Hire proved to be a fun read. Yes, Nic is an escort, and yes, at times, he does get paid extra for sex. That doesn't necessarily mean, however, that everything he does as an escort is sexual nor does it automatically make him a playboy, which is a whole different sort of animal. I won't go into details but let me just say that I appreciated that the author did not sugarcoat what it is Nic does with what I would assume was majority of his clients while also making him more than arm candy and a paid-for bedmate. I liked both Nic and Elle, and they had a good mix of sweet and sexy, although the last third of the book felt a tad rushed. With some bits of humor and minimal angst, I'm giving Boyfriend for Hire four stars, and with that sneak peek at Case's story, I'm looking forward to reading The Hookup Handbook next month, and have my fingers crossed that Ryder gets his own book as well. ♥