Release Blitz: In His Sights by LA Bryce 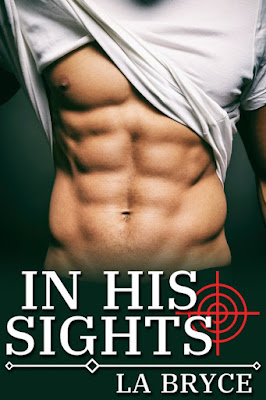 About In His Sights
Meet two men who need each other’s help but don’t realize it until it’s almost too late.

Noah is gay and terrified someone might find out. So much so that when he was blackmailed with pictures of himself with another man, instead of coming clean, he left his SEAL team without a word.

The other man is openly gay Mason, a former Marine and now part of the FBI’s Joint Terrorist Task force. It takes eight years after their first meeting in the desert for a chance event bring the two men together again. Now Noah must decide if he’s ready to accept who he is or if it’s easier to cut and run. Can they navigate the obstacles in their path to build a relationship? And why does the thought of that scare them more than investigating a group of terrorists?

Add In His Sights on Goodreads.

An Excerpt from In His Sights
Nausea racked his body again, but this time Mason couldn’t ignore it. He jumped up and ran to the bathroom. He made it just in time. Puking his guts out with a raging headache was the last thing he wanted to be doing, but he wasn’t given much of a choice. Every time his thoughts went back to what had happened, he ended up perched over the toilet. It hadn’t taken long for all the ingredients in his stomach to be lost to the porcelain gods, followed by the dry heaves that kept him in a bent over position. As he wallowed in self-pity, he heard something that had him standing straight, positioned ready to fight. Someone was in his house.

His hand moved to his holster, but it wasn’t there. Dammit. He looked toward his closet, then at his bedroom door that now hung partially open. If he went to get his gun and anyone came down the hall, they’d have a clear shot at him at his safe. He couldn’t risk it. He needed to be on the offensive. He looked around the room to see if he could find a weapon. Shit. It wasn’t the best, but it’d have to do. He picked up the plunger from behind the toilet. He’d use the rubber part as a grip.

His abdomen cramped as he moved. He took a deep breath and held the air in for a second. The pain subsided. He crept to the door, sliding it open enough to secure a better view out. He hadn’t spotted anyone or anything that appeared out of the ordinary. But right then, whoever invaded his home made their presence known. Mason couldn’t believe the intruder hadn’t heard Mason puking up his guts. But the fact they weren’t trying to stay quiet said they thought they were alone.

Mason slipped out of the bedroom door. He held still, checking if his opening the door wider had alerted anyone to his presence. Reassured he had gone unnoticed, he continued to the end of the hall. Once there, he peered into the living room. The area stood empty, and again, nothing seemed out of place. He paused to listen, all his senses on alert. The noise came from the kitchen. Mason tiptoed toward the room. Once at the door, he stopped dead. He could see the person’s shadow. But that’s not what made him stop. What rendered Mason immobile was the fact the culprit in his kitchen was now singing. Singing. What the fuck? Rob a house, sing a song? It hadn’t made sense. He hadn’t cared. Again, he took a step and froze waiting until the shadow got closer—then he attacked—slamming the wooden stick toward the head of the intruder. He came in contact with skin and bone and the wooden handle broke and fell to the floor. The man shouted, and Mason recognized the voice. His stomach roiled and nausea burned the back of his throat.

Instead of running for the bathroom, he opened up the French doors and ran outside. He made it to the grass just in time. It surprised Mason that something actually came out, but before long he was back to the dry heaves, his stomach cramping. Before realizing Noah had moved, he stood outside next to Mason. Noah placed his hand on Mason’s back and rubbed, and Mason body went rigid. What the hell was he doing there? Why couldn’t Mason remember? Part of him wanted to know, and the other wanted Noah to just leave. Mason knew that thought was bullshit before it fully formed. Deep down, he was glad Noah was there, no matter the reason.

Mason pushed himself up, closing his eyes while the blood rushed to the rest of his body. Cinderblocks crushed down on his head. Noah helped hold him up. Mason wanted to shake Noah’s grip off. But he also wanted to grab it and wrap it around himself. Mason stayed still and did neither.

About LA Bryce
LA Bryce writes m/m romance with a splash of suspense. She loves her men to work hard, play hard and love hard. It doesn’t matter what their walk of life, although she has a special place in her heart for Military heroes, those that put their life on the line every day to keep us safe, trouble always seems to find them—whether it’s a homicidal maniac, someone with a grudge against the country, or an ex who’s seeking out revenge—LA’s guys aren’t always faced with just fighting for love, they often have to fight for their lives.

LA has always lived in the North East and has recently stretched her boundaries and moved further North—the more relaxed life style giving her more time to write—in theory anyway.

Among the things she loves besides writing and her family are her friends, those she writes with and those she writes about, reading, games (the kind with boards, not in love), playing poker, her dogs, Nutella and Bok Choy, and of course, the men and women from the Military, past and present, who keep us safe.

When she finds herself stuck at the keyboard, her fingers refusing to move, her characters refusing to talk, she likes to take a break, blast some music, and dance like no one is watching her or sing her heart out into her hairbrush microphone.

She’s living her happily ever after and wants the same for all her characters. LA believes love comes in all different packages and each should be wrapped in a ribbon and cherished.