Book Spotlight: Demon on the Down-Low by E.J. Russell 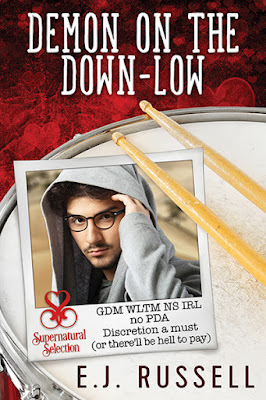 About Demon on the Down-Low
After decades of unrequited love, this kangaroo will jump at the chance for a date. Any date.

Lovelorn kangaroo shifter Hamish Mulherne, drummer for the mega-hit rock band Hunter’s Moon, waited years for the band’s jaguar shifter bassist to notice him. Instead, she’s just gotten married and is in a thriving poly relationship. How is Hamish supposed to compete with that? But with everyone else in the band mated and revoltingly happy, he needs somebody. Since he can’t expect true love to strike twice, he signs up with Supernatural Selection. Because what the hell.

When Zeke Oz was placed at Supernatural Selection through the Sheol work-release program, he thought he was the luckiest demon alive. But when he seems responsible for several massive matchmaking errors, he’s put on notice: find the perfect match for Hamish, or get booted back to Sheol for good. The only catch? He has to do it without the agency’s matchmaking spells, and Hamish simply will not engage.

But Zeke starts to believe that the reason all of Hamish’s dates fizzle is because nobody in the database is good enough for him. And Hamish realizes that his perfect match might be the cute demon who’s trying so hard to make him happy.

Add Demon on the Down-Low on Goodreads.

About the Supernatural Selection series

Are you a shifter who’s lost faith in fated mates? A vampire seeking a Second Life companion? Or perhaps you’re a demon yearning to claim a soul (mate)?

Congratulations! Your search is over!

Welcome to Supernatural Selection, where our foolproof spells guarantee your perfect match.

Learn more about the Supernatural Selection series on Riptide Publishing.

A Guest Post by E.J. Russell
Food Again: It's always about food
Anyone who’s read any of my books knows that I can rarely resist having at least one scene (sometimes more than one!) involving my characters eating together. This isn’t because I’m a good cook (I’m not) or that I enjoy cooking (I don’t) or that I even like eating all that much (nope, unless it involves cake), but because of my Curmudgeonly Husband’s deep and intimate relationship with food.

Unlike me, CH loves to cook. It’s how he relaxes. Not only does he love to cook, but he’s really, really good at it, which was a great thing for our kids. It meant they didn’t have to depend on my “ten minutes or less” preparation limit when it came to meals. Both our sons have inherited CH’s fascination with cooking in the abstract, and while our Lovely Daughter doesn’t approach it with quite the same zeal, she definitely loves to eat. LD is so committed to her workout regime and healthy lifestyle that she’ll force herself to cook to maintain it, rather than fall back on my default meal of a bowl of cereal.

To give you another example, CH doesn’t remember events based on where we were or who was there. He remembers what we ate—sometimes from years ago. Whenever we go on family trips, we’re always either eating or planning where we’ll eat next.

So I suppose you could say that when I decided that demons in Sheol never eat, it was partially to see what reaction I’d get from CH when he found out. 😀

Of course, that also meant I had the chance to introduce Zeke to food in Demon on the Down-Low, which (I hope) will somewhat reconcile CH to the horror.

Canny readers will recognize the fish dish that Zeke inherits during Hamish’s first interrupted date—it’s the same dish that Luke prepares for Stefan in The Artist’s Touch: Trout Grenobloise. CH has been making it for years, based on one of Pierre Franey’s recipes from The 60-Minute Gourmet, and it’s one of my favorites.

I give a nod to our family’s food-tour habits with the street-level falafel restaurant below the Supernatural Selection offices. CH’s father emigrated from Syria at the age of sixteen; his mother was born in Brooklyn, but her parents emigrated from Lebanon. Consequently, his “food roots” are Middle Eastern. He makes a killer hummus, but one thing he’s never mastered to his satisfaction is falafel—yet it’s one of his favorite street foods. Whenever we find a new Middle Eastern restaurant, he’ll try their falafel as a test. But I don’t think he’s ever found anyplace that lives up to Mamoun’s.

During my last year of graduate school in New Haven, CH (who was my CBF at the time) worked evenings at Yale Rep and used to visit Mamoun’s after the shows for a snack. The proprietor used to make ful mudammas especially for him (with, er, extra garlic, which was quite obvious when he got home). Whenever we visit our kids in NYC, we usually end up at one of Mamoun’s locations at least once.

So when I was populating the story world street-level businesses below the Supernatural Selection offices, I decided to put in a falafel restaurant—sort of a cross between Mamoun’s and Little Big Burger (one of LD’s favorite Portland spots).

And then I chose to make Zeke’s first food craving falafel as a tribute to CH. 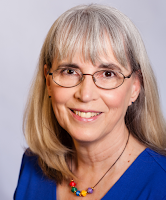 Giveaway
To celebrate the release of Demon on the Down-Low, one lucky person will win a $25 Riptide Publishing gift card and an ecopy of either Single White Incubus (first in the Supernatural Selection series) or Bad Boy’s Bard (the book from the Fae Out of Water series that influences this one). Leave a comment with your contact info to enter the contest. Entries close at midnight, Eastern time, on March 2, 2019. Contest is NOT restricted to U.S. entries. Thanks for following along, and don’t forget to leave your contact info!