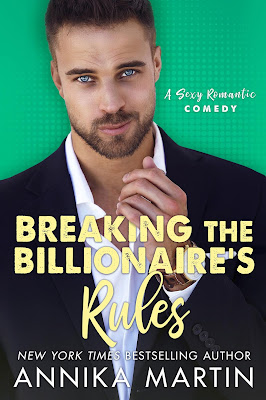 About Breaking the Billionaire's Rules
Max Hilton is my high school nemesis turned billionaire. And tomorrow I deliver his lunch order. In a cat costume.

You know he’s going to love it. He’ll smile that smirky smile, sitting there all superior in his gleaming tower, the wealthiest and most notorious playboy in all of New York, the king of everything.

Turns out it wasn’t curiosity that killed the cat—it was mortification.

I’m almost ready to quit my lunch delivery job, but then my roommate tosses me a copy of The Max Hilton Playbook: Ten Golden Rules for Picking up the Hottest Girl in the Room.

It’s the book that catapulted him to stardom. And it’s my new bible.

I’m going to use his own techniques against him. I’ll wrap him around my little finger, bring him to his knees, and crush his steely heart. Call it payback for all the single girls who had to endure legions of losers wielding his legendary tactics.

But seeing Max every day, I’m discovering a side of him I didn’t even know existed—he’s not the jerky guy I thought he was. He has this smile he shows only to me, and it melts my heart. His touch sends shivers down my spine. And those forbidden kisses are driving me wild.

Falling for him was not in my plan.

Am I breaking his rules or will his rules break me first?

This standalone rom-com is set in the same world as The Billionaire's Wake-Up-Call Girl and Most Eligible Billionaire. 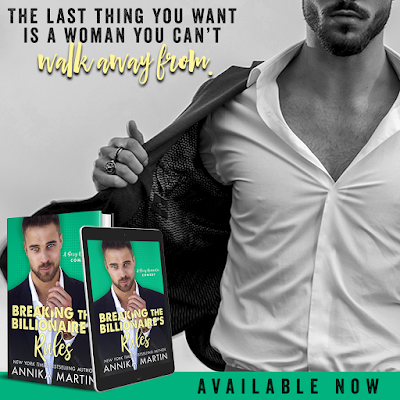 Read my five-starred review of Breaking the Billionaire's Rules. 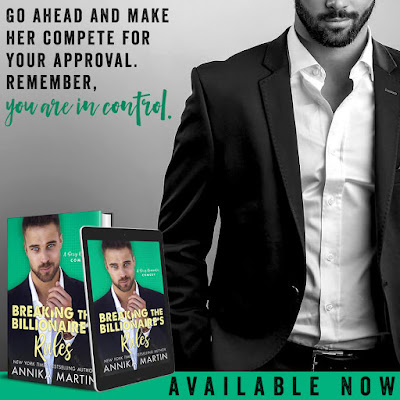 An Excerpt from Breaking the Billionaire's Rules
“Are we going with cheesy puffs today?” I ask.

“Good job,” I say. “You made an excellent choice. And just for that, you get an extra bag!”

He tightens his jaw as I snatch up an extra bag.

I’m keeping him off-balance. I feel like I’m really nailing his system today. I head right for him, all the way around his desk, holding his gaze, because that’s what you do to show a dog that you’re in charge.

It hits me here that holding a man’s gaze and walking steadily toward him, never looking away, is also an incredibly sexy thing to do. Every inch of my skin feels alive with excitement.

He swivels away from his desk as I near, facing me with that strangely serious expression. His shirt cuffs are rolled partway up his muscular forearms. His hands rest on his hard thighs, fingers relaxed. Nails trimmed short. Pianist-short. Some habits die hard.

And those thumbs. They’re the same thumbs he stuck in his belt loops while he sang with all of that sweet goofiness during that lost summer. Though science tells us that the cells of the body replace themselves over time—nine years for an entirely new body. So he really is a different person in every way.

I stop in front of him, heart jackhammering in my chest, remembering the way he’d sing to me during that lost summer.

Even when there was a full auditorium, it was as if he was singing to me and me alone, gaze dancing under that floppy hat. The song was about young, hopeful love. It’s how I felt that summer.

It meant nothing to him. A dalliance of proximity. The second we were back at school, he returned to his cold and cynical mode. Too cool for me.

Quizzically, he tilts his head. “Mia?”

Have I been standing there weirdly long?

I think back to his book. If you feel your control slipping, simply give her another reward for something.

“And as a reward for extra predictable behavior…” I toss one bag onto his desk and pull open the other one with a loud crinkle-snap.

I remove one puff from the bag and hold it out to him. “Open,” I whisper, pulse racing. “Open for your prize.”
He watches me sternly. Opening for his prize is the last thing he’s going to do. Nobody pushes Max Hilton around.

The book doesn’t have instructions for outright rebellion. The book doesn’t say how sexy that might be. How a person’s beauty can squeeze deep into your belly. How you might really want to kiss him. To straddle him and sink into him and make him remember. Make him come back.

“That’s not open.” I nudge his lower lip with the cheese puff. “Do better,” I say.

He grabs my wrist.

His big, warm hand, encircles my wrist snugly and completely. His challenging gaze deepens, like he can see right into me.

The bright orange cheese puff falls from my fingers.

Slowly, he pulls my hand toward him, pinning me with his eyes.

I swallow, mouth dry. “Are you going to eat my fingers instead?” I whisper.

He brushes his lips over my knuckle, soft and warm and smooth as velvet. 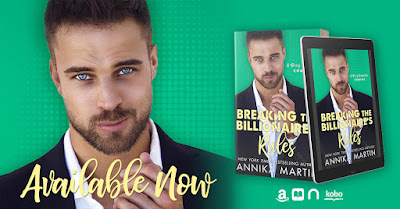 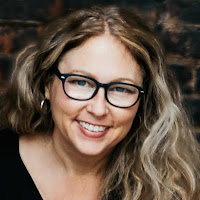 Annika Martin loves fun, dirty stories, hot heroes, and wild, dramatic everything. She enjoys hanging out in Minneapolis coffee shops with her writer husband, and also likes birdwatching at her bird feeder alongside her two stunningly photogenic cats, especially when she should be writing. She’s heavy into running, music, saving the planet, taking long baths, and consuming chocolate suckers. She’s worked a surprisingly large number of waitressing jobs, and has also worked in a plastics factory and the advertising trenches; her garden is total bee-friendly madness and her most un-favorite word is nosh or possibly fob.