Audiobook Spotlight: Road of No Return by K.A. Merikan, narrated by Wyatt Baker 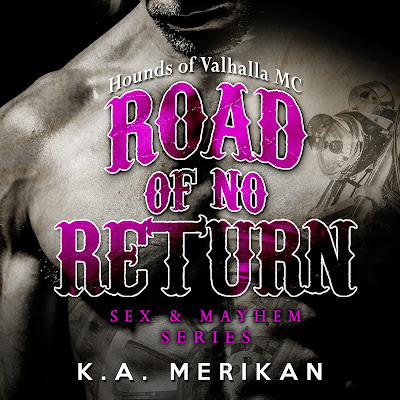 About Road of No Return
Don’t talk to strangers.

On the day of Stitch’s divorce, lust personified enters the biker bar he’s celebrating at. Tattooed all over, pierced, confident, and hot as hellfire, Zak is the bone Stitch has waited for life to throw him. All Stitch wants is a sniff, a taste, a lick. What follows instead is gluttony of the most carnal sort, and nothing will ever be the same. Forced to hide his new love affair from the whole world, Stitch juggles family, club life, and crime, but it’s only a matter of time until it becomes too hard.

Zak moves to Lake Valley in search of peace and quiet, but when he puts his hand into the jaws of a Hound of Valhalla, life gets all but simple. In order to be with Stitch, Zak’s biker wet dream, he has to crawl right back into the closet. As heated as the relationship is, the secrets, the hiding, the violence, jealousy, and conservative attitudes in the town rub Zak in all the wrong ways. When pretending he doesn't know what his man does becomes impossible, Zak needs to decide if life with an outlaw biker is really what he wants.

As club life and the love affair collide, all that’s left in Zak and Stitch’s life is mayhem.

Add Road of No Return on Goodreads. 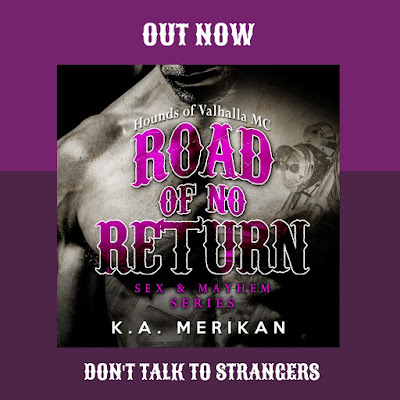 About K.A. Merikan
K.A. Merikan is the pen name for Kat and Agnes Merikan, a team of writers, who are taken for sisters with surprising regularity. Kat’s the mean sergeant and survival specialist of the duo, never hesitating to kick Agnes’s ass when she’s slacking off. Her memory works like an easy-access catalogue, which allows her to keep up with both book details and social media. Also works as the emergency GPS. Agnes is the Merikan nitpicker, usually found busy with formatting and research. Her attention tends to be scattered, and despite pushing thirty, she needs to apply makeup to buy alcohol. Self-proclaimed queen of the roads.

They love the weird and wonderful, stepping out of the box, and bending stereotypes both in life and books. When you pick up a Merikan book, there’s one thing you can be sure of—it will be full of surprises.

About Wyatt Baker
Wyatt Baker is a cartoon/video game voice actor and M/M (mostly) audiobook narrator with a dynamic, energetic, and powerful voice.