Review: The King and His Vigilant Valet by Charlie Cochet (Paranormal Princes #3) 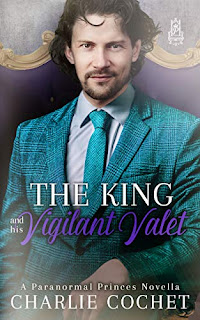 Oh, how addictive this series has been, and with the release of the third and final book come that bittersweet feeling that accompanies the end of something that I’ve grown attached to. Charlie Cochet’s Paranormal Princes is an M/M paranormal romance trilogy that’s entertained the heck out of me, and in the first two books, two characters have been highly noteworthy and now, we finally get their story! I’m talking about none other than Alarick and Jean, aka the King of All Shifters and his most trusted adviser, valet, and best friend. To everyone else, they are King Alarick and Lord Eldrich—the yin to the other’s yang. They’ve balanced each other out for centuries, but while Alarick could never even contemplate hiding anything from Jean, it’s Jean who has not as been as forthcoming as he should have been. So, when Jean’s past unexpectedly comes calling, he knows the time has finally come for him to reveal all to his king—the only one he would not hesitate to kill for, and the very same one he was sent to kill all those years ago.

Goodness, but how excited I was when I finally got my greedy hands on this book! Even a blind person—pun unintended!—could see that the relationship that Alarick and Jean shared went beyond platonic, but well, Alarick may have been a wee bit clueless. I loved how devoted these two were to each other, and that was even before anything romantic happened. Jean’s back story fascinated me, and the history that they had wasn’t quite what I’d expected, and that in itself earns Charlie Cochet kudos because how doesn’t love it when an author throws you a curve ball, and there were several Cochet served up in this book. Just like the two earlier releases in the series, this book can be read as a standalone, although the first two couples do make appearances here. And this is where I tell you to just go ahead and read the other books because they’re fun reads, and with everything happening in the world right now, we all need a bit of escapism and Cochet offers that and much more with The King and His Vigilent Valet. Five stars! ♥

Read my reviews for the Paranormal Princes series:

Purchase The King and His Vigilant Valet on Amazon.