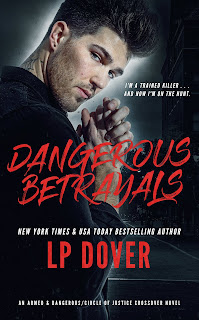 Dangerous Betrayals is the second novel in the collection of crossover stories from L.P. Dover’s Armed and Dangerous and Circle of Justice series. Kennedy Scott is a twenty-six-year-old high school teacher who has been trying to restart her life ever since her mother was murdered and Kennedy herself was attacked two months afterwards. She thought that part of her life was behind her, with a move to Vermont giving her the opportunity to begin a new chapter. The police assured her that she no longer had anything to worry about, not with the guilty party behind bars. Only a spate of grisly murders gives the authorities pause, especially when the victims all bear an undeniable resemblance to Kennedy and the original attack on her. The police decide to bring in Reed Chandler, and the man is one of the best at what he does. He may only be twenty-eight but he’s a prized asset of the Circle of Justice, a clandestine group under the FBI. Reed is on the hunt for a crazed killer and intends to ensure Kennedy’s safety, but as he gets closer to Kennedy, could his feelings for her become a distraction as the killer edges closer to his prime victim?

L.P. Dover once again proves that you don’t need hundreds upon hundreds of pages in order to pull off a story that has meat and grit to it. She doesn’t skimp on the action and tension and balances it quite nicely with the more romantic elements of the story. I quite liked how Kennedy evolves from victim to survivor to heroine. She went through a great deal and came out of it scathed but stronger. As for Reed, what can I say other than who wouldn’t want someone like that in their corner? Gah! You can read this book as a standalone, meaning you don’t necessarily need to read the first crossover novel or any of the other books from either the Armed and Dangerous or Circle of Justice series. Dangerous Betrayals receives 4.5 stars. ♥

Read my reviews for the Armed & Dangerous/Circle of Justice Crossover series: