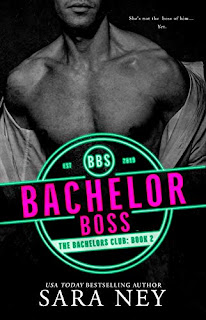 Sara Ney’s most recent series, The Bachelors Club, has gone through a bit of a tweak, dropping the word “bastard” from the individual book titles. I’m not privy to the reasoning behind the change, but I’m guessing the aforementioned word may not have been too appealing to some readers, not that I’m one to judge a book by its title, so I had absolutely no issues either way. The series itself got off to a pretty good start with Bachelor Society, and now, we’ve got the second book in the series, Bachelor Boss. With one bachelor down, there are only two left, and with as high stakes of a bet as the one their club has created, Phillip McGuire has no intention of losing. At twenty-eight, he’s got a good job, two best friends, and the world’s greatest, albeit also the laziest, dog. He’s got a bet to win and even if he didn’t, he’s not looking to settle down—especially not with someone like Spencer Standish. The thirty-year-old may think she’s the boss of, but she isn’t. She may win over my dog, Humphrey, but not me. Nope. No way. Right?

This second Bachelors Club novel had an office romance feel to it with a dash of enemies-to-lovers, and it did bring some laughs along with the expected sweet and steamy moments between the main characters. What starts of as bickering between Phillip and Spencer evolves into entertaining banter, the kind that showcases how their relationship from two people who barely tolerate one another to more. While I liked Phillip and Spencer, I confess that my favorite character in the book happens to be the four-legged, long-eared, furry one! I adored Humphrey, who very much reminded me of my beloved fur-baby boy, Oliver. Every single time Humphrey lumbered into a scene, there was simply no resisting him, and I doubt that he had any qualms stealing each scene, and showed everyone he was the true Bachelor Boss. Four stars. ♥

Read my reviews for the Bachelors Club series: