Review: Nobody Does It Better by Lauren Blakely (Lucky in Love #3) 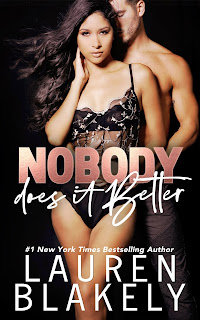 Romantic comedy reads are my jam (does anyone actually still say that?), and no one does rom-com better than Lauren Blakely. Her Lucky in Love series featuring three best friends living and finding love in the small town of Lucky Falls has become a favorite, and the third and final book was one I'd been itching to get my hands on ever since it became glaringly obvious that there was something going on between firefighter Shaw Keating and bowling alley owner Vanessa Marquez. The main stumbling, though, just happened to be his younger sister, aka her best friend, who's made it repeatedly known for years that Shaw was to not pursue anything non-platonic with Vanessa.

Nobody Does It Better is more novella in length compared to its two predecessors, Best Laid Plans and The Feel Good Factor, but it's got every bit of that rom-com goodness that the full-length novels had. I liked that hint of a twist with the falling-for-my-sibling's-best-friend--which could also be falling-for-my-best-friend's-sibling--what with Perri, Shaw's sister, being the one to make it clear that Shaw was to stay away from Vanessa. It had nothing to do with Shaw being a bad guy but more to do with what many saw as his reputation as a guy who got around...A LOT. But you see, he's had a thing for one girl and one girl only ever since they were in high school and that's none other than Vanessa. And hey, it's a very mutual thing going on, and all it takes is a snowstorm to give them a push.

Lauren Blakely never fails to create main characters that make it impossible for me to not like them at the very least. I've liked Shaw and Vanessa from the moment they were first introduced, but reading their story made me fall in love with them. These two had chemistry, but they were also saddled with a whole lot of guilt since they had feelings for each other but then the Perri factor was constantly stalling any progress they'd make. Sure, I've read other books before that have had used the same trope and I've come across stories that have had the main characters trapped somewhere due to some force of nature, but there's something about Blakely's writing that makes everything all the more charming and endearing. I adored the romance and the passion as well as the friendship Shaw and Vanessa shared, making for a fun quickie of a read. I'm giving Nobody Does It Better five stars. ♥

Read my reviews for the Lucky in Love series:

Purchase Nobody Does It Better on Amazon | Apple Books | B&N | Kobo.