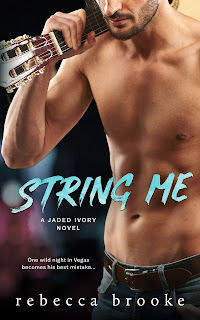 Oh, Monty, Monty, Monty! Just when I thought there was no beating Mari Cosmann and Cole Wallace's story in the Jaded Ivory series starter, Rock Me, but along came Monty Vance's book, and well, it's officially become my favorite among the four that have been released so far. Maybe I shouldn't be all that surprised that String Me has earned that top spot. After all, it's usually the "wild" ones or the known troublemaker in the group, whether it be a family or band or circle of friends, that have the sort of story that resonate most with me. Monty has watched three of his four band mates fall in love and found committed partners, and while he's all happy for them, he can't help but notice that the family they've created as a band is falling to the wayside. Sick and tired of the new status quo, Monty decides to take some time off and heads for Vegas. There he meets a woman named Allana Kerr, who just ended her relationship with her cheating ex. All it was supposed to be was a night of fun, but when the media--and the band--gets wind of what kind of fun Monty and Allana had, life for these two is about to change, but they're in it for better or worse. Right?

I loved Monty and Allana! These two seemed like such an unlikely couple, but gah! They were absolutely perfect for each other, becoming the counterpoint to the other and creating a much needed balance neither one of them realized they'd needed. Because I've read the first three books in the series and have seen Monty as a supporting character in those, I must admit that he did a whole lot of growing up here and that character development of his had to be one of my favorite things about this book. I liked that Allana learned how to have a stronger backbone and that she saw Monty as the man he was and not just the rock star that the rest of the world fawned over. Together, they've become my numero uno couple in this series. There was quite a bit of unexpected drama when it came to Jaded Ivory as a band, but I think it was something that was necessary in order to keep the story arc of them as a group slash self-made family even more interesting. I'm definitely looking forward to seeing how the series wraps up with the fifth and final novel, but for now, I shall be giddily basking in all things Monty and Allan in String Me. This gets five stars! ♥

String Me (book four) - five stars - My Review (posted above)