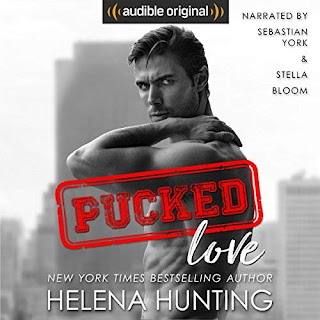 “I waited my entire adult life for you to come along and make sense in my world. I'm prepared to wait as long as I need to for you to accept that.”

“I'll be here when you're ready to stay.”


OMG! This book has been a long time coming! Fans of the hockey romantic comedy Pucked series have gotten bits and pieces of right wing Darren Westinghouse and twenty-five-year-old accountant Charlene Hoar--aka DarLene--in the earlier books, and when bestselling author Helena Hunting announced that she was FINALLY writing their story, I'm pretty sure I wasn't the only one who squealed in delight. The fact that this was also going to be an Audible Original more than tickled my fancy, thanks to my addiction to audiobooks this year, and once the title was available for pre-order on May 15th, I did so with gusto, and once Pucked Love arrived on my Kindle, I dove right in!

Two years into their relationship and there's no denying that Darren Westinghouse and Charlene Hoar (the H is silent!) are doing pretty well. The boundaries have been set from the moment Charlene refused to sign the NDA that Darren handed her on their first date. But change could be in the offing. There's a possibility Darren will be part of an expansion trade that may see him move from Chicago to Vegas, but that's a change he may have time to prepare for. The change that he wishes he could enact is the one involving the status of his relationship with Charlene. He would love nothing more than to keep her by his side forever, but in doing so, she may choose to run.

Okay, allow me to get this out of my system before I start getting into the nitty-gritty of my review for this sixth full-length Pucked book: SQUEEEEEEEEE!!! Pucked Love was...everything. Seriously. Oh, I knew the humor that this series is known for was going to be very much present, and indeed, it was. Then there was the hot sex, and boy, oh boy, was the sex HOT. I'm talking sizzling here. Maybe have your AC or an electric fan handy while you're reading. See, humor and heat are part and parcel of all things Pucked. One other thing that's a given with this series? Heart. Le sigh, how this not only sated my need for angst but also took pieces of my heart with everything DarLene faced.

There are a number of twists in this book, a couple I saw coming but most leaving me gobsmacked. These twists don't just involve Darren and Charlene either, though naturally, majority are tied to them. Of course, the Pucked gang is present and everyone accounted for--Alex and Violet Waters, Miller Butterson and Sunny Waters, Randy Balls and Lily LeBlanc, and Lance Romero and Poppy O'Connor. We do get a teeny, tiny bit of Rook Bowman--aka Rookie--but I doubt that he's had enough of a presence to warrant a full-length novel of his own. So...possibly a novella? Yes? Maybe? Hopefully? PLEASE, HELENA HUNTING?! I'm not above begging. Fingers and toes so crossed!

Anyhoo, back to DarLene... This book was above and beyond what I was hoping would be their story. Expectations were extremely high, especially given that these two had stirred many a curiosity over the span of several books. Well, consider my curiosity satisfied and then some! I don't know what Helena Hunting's end goal was when she first wrote Pucked, but here we are, six full-length novels, two novellas, and several outtakes later, and her books in this series have spawned a following beyond compare. Sebastian York and Stella Bloom took Hunting's story, and dare I say, have made her--and DarLene--proud. Pucked Love is one of 2018's very best audiobooks. Five-plus stars. ♥

Read my reviews for the Pucked series: 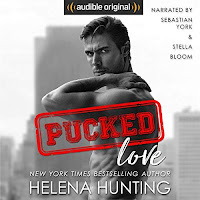