Review: Get Inked by Helena Hunting (A Pucked and Clipped Wings Crossover Novella) 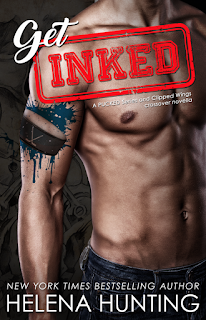 I can never get enough of the guys and gals of one of my favorite romantic comedy series, Pucked, and now I find myself rather curious about their tatted up counterparts in the Clipped Wings series, of which I have the currently available books sitting pretty on my tablet for a period of time I'm not willing to mention publicly due to pitchforks being bandied about by those who think I'm an embarrassment for not having read them sooner. If you're like me and have only exclusively read the Pucked books or on the flipside, have only read stories of the peeps over at Inked Armor, this crossover novella from bestselling author Helena Hunting will no doubt pique your curiosity about either one and leaving you itching to learn more.

Told from multiple points of view, some of whom I was quite excited to finally hear from, Get Inked is a novella that brings together the worlds of the pucktastic boys of the Chicago Blackhaws--Alex Waters, Miller "Buck" Butterson, Randy "Ballistic" Balls, Darren Waterhouse, and Lance Romero--and the women in their lives--Violet Waters, Sunny Waters, Lily LeBlanc, and Charlene Hoar--save for Lance, with that of the people of Inked Armor--Hayden Stryker and Chris Zelter, with appearances from Lisa, the shop's piercer, and Jamie, the shop's third tattooist, and Tenley Page, Hayden's girlfriend, plus Sarah Adamson, the girl Chris is seeing, but just like Jamie and Lisa, she's more of a supporting character. Everyone save for Buck, Sunny, Charlene, Jamie, Lisa, and Sarah get their POVs heard in this hilarious crossover novella.

It takes extra effort to make a series crossover work, but I think the fact that both the Pucked and the Clipped Wings series are set in the city of Chicago helps a great deal here. Having Hayden as Randy's longtime tattoo artist and Chris as Alex's isn't just plausible; it feels natural considering they're athlete slash celebrities that will no doubt go to the best tattooists around. Everything I expect to find in anything Pucked-related is here in full force while also giving me a glimpse into the minds of Lance and Darren as well as Darren's kinda, sorta, maybe relationship with Charlene and Lance's non-existent one with former Blackhawks trainer Tash. Now that I've had a taste of Hayden and Tenley as well as Chris and Sarah, I'm ready and raring to get started on the former's love story before the release of the latter's tale in November. If you're a fan of either or both series, Get Inked is a five-starred delight of a rom-com novella. ♥