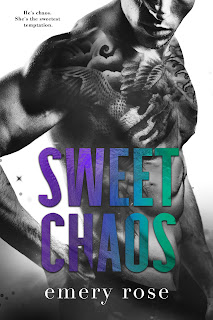 “What are we doing? What are we, Dylan? You say it’s not just sex, you say we’re not just friends, so what are we?”He sighed in exasperation and carved his hand through his hair. “You wanna slap a label on it?”“No. I want an answer.”“I don’t know what we are. But I know that I want you. And I don’t want anyone else to have you.”


My introduction to Emery Rose was by way of Wilder Love, the first book in her Love & Chaos series, and I was floored by the story she had to tell and the way she told it. By the time I was done reading that book, I knew two things for sure: I was going to be adding all of Rose’s previous releases to my to-be-read list, and I seriously needed to get my hands on Dylan St. Claire’s story next. Well, thank goodness I already had said book ready and waiting for me, and goodness, but it was even better than I could have imagined! Consider me the newest member of this author’s fan club because she’s one worth keeping an eye on.

Twenty-seven-year-old Dylan St. Claire may be a self-made millionaire, but to some, he’s still the guy with a bad reputation from the wrong side of the tracks. Not that Dylan cares what other people think of him. All he cares about is his twin sister, Remy, and the family she’s creating for herself with her husband. Then he catches sight of twenty-year-old Scarlett Woods. She’s done quite a bit of growing up over the years. He may have mistakenly climbed into her window when she was eleven and he was seventeen, but there’s no mistaking his desire to climb into her bed all these years later. You’d think having a crush on him when she was younger would make things easier, but one will always remain the same: her sister is Dylan’s ex.

Ah, the feels this book gave me! The first book in this series was a notable one that left a lasting impression on me, but this second one took things to a whole new level of noteworthiness. I loved getting to know Dylan and Scarlett better in this book, and while they may have appeared to come from two different worlds, they had far more in common than you’d think. These two had their issues in life, but at the core of their story, they were simply two people who were drawn to each other and fell in love even though propriety may dictate that such a thing was unacceptable. An added bonus was seeing how far Remy and Shane Wilder had come in their own relationship—FYI, their story is chronicled in Wilder Love—plus there were quite a few memorable supporting characters. Sweet Chaos is a 2020 favorite and get five-plus stars. ♥

Read my reviews for the Love & Chaos series: