Review: Steal You Away by Victoria Ashley 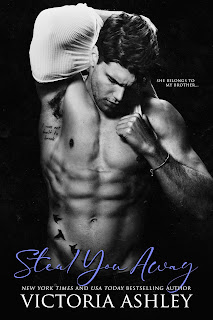 Ooh, this book was a delicious bit of dirty fun and romance with just enough angst to satisfy even an angst addict like me. Victoria Ashley is back and she’s got a falling-for-a-sibling’s-best friend romance but with an intriguing twist to it. Steal You Away is about Colson Bennett, a young man who’s had his heart set on one woman, and one woman only, for years—Kennedy Ward. Unsurprisingly, claiming her as his own is complicated. Sure, she’s three years older than he is, but that’s something that can easily be swept to the side. Age is, after all, just a number. No, the wrench in the whole thing is how Kennedy is tied to his sibling, and nope, not his sister, Blaire. Kennedy happens to be his older brother, Dax’s, girlfriend, and they’ve been together, on and off, for almost eight years. Colson fell for Kennedy first, and Dax took her away from him, but there’s no way that Dax is the right guy for her, not when they take breaks from their relationship as often as they do. Two years ago, Colson walked away; this time, he’s stealing her from Dax.

I love it when an author is able to add their own unique twist to a well-worn romance trope and do so in a way that feels organic, so there’s simply no way you would question the possibility of such a thing happening in real life. The prologue in the story takes place two years prior, and it becomes a turning point of sorts in the tenuous non-relationship between Colson and Kennedy, the former being nineteen at the time, and Kennedy being twenty-two. The rest of the book is when Colson returns to their hometown, deciding once and for all that he was going to not just make a play for Kennedy but steal her away from his brother, Dax, with whom he has a rather frayed relationship. It’s easy to peg Colson as someone who was more on the crude side and was downright pushy and somewhat manipulative, but there’s so much more to him than meets the eye. His feelings for Kennedy went beyond the physical, and he fought for her in more ways than one. Seriously, just go and read Steal You Away already! 4.5 stars. ♥

Purchase Steal You Away on Amazon.