Review: The Parable of the Mustard Seed by Lisa Henry 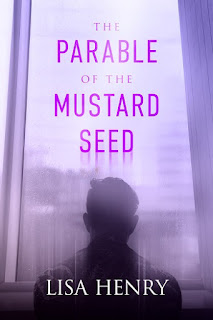 And every justification he'd ever made about why this was a bad idea crumbled like sand in the face of Caleb's certainty. Because how could breaking Caleb's heart now be better than maybe breaking it in the future? A thousand worst case scenarios flashed through his mind, and always would, but the truth remained unchanged.

Whenever I read something penned by Lisa Henry, I know I’m going to get a story that isn’t your usual romance, but still has every bit of heart to it. In The Parable of the Mustard Seed, she gives readers the story of a man who rescued a boy, and eight years later, has fallen in love but refuses to act on his feelings. This isn’t a lighthearted read, although there are some lighter moments, but it is one that reminds readers that even in the most dire and darkest of situations, there is light at the end of the tunnel and hope is something that one shouldn’t just allow themselves to have but something that every person deserves. This book was intense but in a way that I relished because I actually love to indulge in because they’re heavier in tone. I also make no secret of the fact that I love angst in the fictional books that I read, and when it’s backed up with superb storytelling from an author such as Lisa Henry, well, consider me smitten.

John Faimu, a thirty-year-old Senior Constable with the Child Protection and Investigation Unit, has investigated countless cases in his career, but none have made as lasting an impact on him as the one when he was just twenty-three. That’s when he first met a fifteen-year-old boy who was beaten and near death at the hands of religious fanatics. That boy was Caleb Gray, who was born Jason Fletcher, only to be abducted by his mother and goes missing for a decade. Eight years after he’s rescued, Caleb Fletcher may live a comfortable life with his father, Darren, but he bears a myriad of scars—physical and otherwise—because of what happened. John has always kept his promise of being there for Caleb, but will he ever allow himself to be there in a way that they both want but John believes they can never have?

At the heart of this was the romance between John and Caleb, but this was also the tale of two families—John’s and Caleb’s—in the midst of a grieving process that includes everyone finding their footing. John’s family lost its patriarch, while everyone has somewhat continued moving forward, there are those who are dealing with the loss in self-destructive ways. The burden of what to do is usually put on John’s shoulders, and the guy definitely takes on more than he has to, but there’s no doubting his love for family.

Then there’s Caleb and his father, Darren, where you can almost still feel that smidgen of grief that Jason is forever lost to Darren even after all these years. There’s no denying that Darren is devoted to Caleb, but his own life is in a holding pattern of sorts, and you feel for him as much as you do for Caleb because they were both victims. I seriously wanted to hurt Caleb’s mother—i.e. Darren’s ex-wife—because she’s proof that some people simply do not deserve to be parents. Sadly, as much as Caleb’s story is fictional, there are too many real-life cases that are like his, and this book is a reminder of that very depressing fact.

Lisa Henry has weaved a story that gave me pause. It made me think as much as it made me feel. She doesn’t pull any punches, but she also doesn’t give readers drama for the sake of drama. This was about a deep love and devotion for someone you consider a significant other, but it was also about love for family as well as one’s struggles to become better and create a life for themselves in spite of their circumstances. If you’ve never read anything by this author, you’re definitely missing out, which is why I’m highly recommending that The Parable of the Mustard Seed be a part of your to-be-read list. Five-plus stars. ♥

Purchase The Parable of the Mustard Seed on Amazon.