Review: Into the Clear Water by B. Celeste 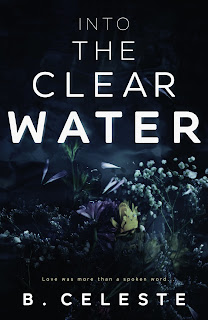 When I decided to read Into the Clear Water, I have to admit that the blurb was a wee bit confusing. Maybe the author wanted it to sound cryptic; instead, it just came off as a wee bit jumbled. But hey, maybe that's just me, and at the end of the day, confusing blurb or not, what I got in return was a beautifully written novel that more than satisfied my angst addiction. A quick heads-up, though: there is somewhat of a love triangle here, and while there isn't any actual cheating, I know not everyone is into the idea of a triangle in a romance.

Twenty-six-year-old Piper Montgomery is the guardian to six-year-old Ainsley, daughter of her late best friend--amd the only guy Piper has ever loved--Daniel McCray. Her roommate is twenty-eight-year-old Easton Wyatt, who is quiet but observant and cares about Piper and Ainsley more than she knows. Thirty-nine-year-old Carter Ford is her brother's best friend and the professor that Piper is a teaching assistant for. While Danny was the guy she loved, Carter was the one she had crushed on growing up. But who is Easton to Piper?

This was such an emotional read, and my heart went out to Piper. She was someone who loved fiercely and was loyal to a fault, putting others before herself. While there is a love triangle of sorts in play, there is no cheating. I know that sounds weird, but you'll see what I mean when you read the book. Both Easton and Carter were good guys, but one stood out more than the other, and no, I won't say who. Ainsley was a remarkable supporting character, and the ending made me smile. All in all, Into the Clear Water was a great 4.5-star read. 🖤

Purchase Into the Clear Water on Amazon.