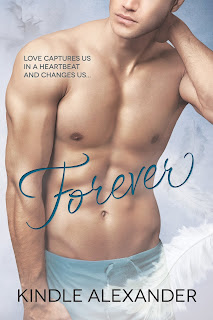 It's been over six years since Kindle Alexander released her bestselling novel Always, and it took me nearly that long to finally read it! So, it was back in September of last year that I finally got my hands on this title, and I simply fell in love with the epic love story of Avery and Kane Adams. It was a bittersweet tale of true love, and I may have need a tissue or ten while reading it. Don't worry, I'm not going to spoil it for any reader out there who has yet to pick the book up! Just have tissues on hand, people. Anyway, when I was done with that book, I knew that I needed one particular character to have his own happily-ever-after--Avery and Kane's son, Robert. And months later (for me--I know it's waaay longer for anyone else who read the book years ago), the wait is over because Alexander has released the companion novel and the awaited second book in the Always & Forever duet: Forever!

Fair warning: I may inadvertently mention details from this point onward that may prove to be spoiler-like for anyone out there who hasn't read Always. I try to keep my reviews as spoiler-free as possible, but since there are ties between that first book and this second one, consider this your heads-up that you may come across stuff that could give you more information than you would like regarding what happened in the first novel in the A&F duet. That being said, you could read either of the books as standalones; however, I'm going to highly recommend that if you are going to read both of them, you read them in order. So, that means go with Always first, and then Forever.

Robert Adams has led a storied life--son of a former vice-president and a renowned chef and restaurateur, brother to an amazing twin sister, and a gifted cardiovascular surgeon. But when he lost both his fathers in such a short span of time, Robert's life has felt as if it's in a tailspin, mired in guilt. The decision to request to be placed on limited duty in the Landstuhl Regional Military Hospital in Germany was something he had to do, but he's still drowning in grief. Then he meets Landon Russo, a Tech Sergeant with the US Air Force recovering from a broken arm and a few more injuries from a fall. The two men strike up a kinship, one that quickly feels like more. Will they allow challenges, insecurities, and doubts to get in the way of what could be true love, or could fate lead the way?

This was a beautifully written story about soul mates and the role that fate can play in our lives. Of course, free will is a component that could change life's course, and Robert and Landon certainly had their moments where they were a wee bit hardheaded. However, their story highlights that when you give your feelings and yourselves a chance, true love prevails. Now, as heartrending as the first book was, this second one is more hopeful in tone. Robert and Landon undergo their struggles as individuals and as a couple, but this does have a happily-ever-after, so no tissues will be required. The role of fate in their story was one that I loved seeing, and while I know not everyone believes in fate, our main characters also make their own choices, and could have let certain opportunities put before them pass by. It was also great seeing familiar supporting characters from Robert's side of the family, as well as meeting Landon's and how both come together was just the sweetest. Five stars for Forever. ♥

Read my reviews for the Always & Forever series: