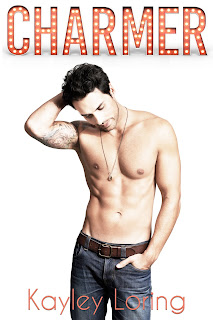 That’s when I knew for certain.
Everyone else had it wrong.
This woman is going to break my heart, and I’m going to let her.


I’d been itching for this book ever since Nico Todd made his presence known in Sleeper, and consider me absolutely charmed by him and the story he shares with a sassy single mother, her precocious son, and her no-nonsense mom. Charmer was exactly that—a charmer of a romantic comedy, and I was smitten with Nico from the first page onwards, and he had himself the perfect partner in Katherine Dempsey. This is a companion novel to Kayley Loring’s previous release Sleeper, but both novels can absolutely be read as standalones. However, because they’re equally awesome reads, I’m going to highly recommend that you check both books out, especially if you have a thing for single parent and slash or celebrity rom-coms.

At twenty-nine, Nico Todd has had the sort of career path that many envy. He’s been a teen actor who had a hit television show where he met his best friend turned brother-in-law, and now, he’s a singer slash songwriter who has a strong fan base that’s only getting larger. You’d think he would have better things to do than to spend hours at a local diner waiting on a particular waitress. Nico hasn’t been interested in any other woman ever since he met Kat Dempsey, but the twenty-seven-year-old limits their interactions to harmless ones as she pours his coffee and serves his food. It’s not that she isn’t interested—she is. But she’s already got one male in her life, and he’s always her number one priority—her six-year-old son, Tate. However, Nico’s already invested and he’s all in, even if it means taking Kat’s family on tour with him.

I so adored this book! I laughed my happy heart out, and for good reason. There was wit and humor alongside the romance and sex and some family shenanigans on both sides. Nico was amazing and easily had my heart, while Kat was such a fantastic and protective mom to Tate but also recognized that she needed to have the sort of love Nico could offer in her life. Shane and Willa Miller along with the twins make appearances, and I loved seeing where they were in their relationship, and Kat’s mom, Louise, was a hoot who had her own romance going. Charmer was a fabulous five-plus-starred romantic comedy. ♥