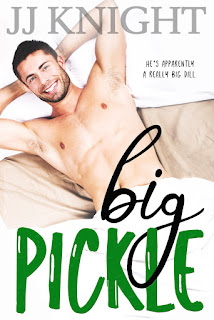 Would you believe that THIS is my first ever JJ Knight read?! I do have several of her books in my e-reader, but Big Pickle is the first one that I've actually read, and it was the perfect, delightful diversionary story that I needed in my life. This romantic comedy delivered with both the romance and the comedy, what with Knight giving heavy doses of both while still maintaining that tenuous balance between the two elements. The "big pickle" in question is twenty-eight-year-old Jason Pickle, aka Jace, the eldest among three brothers, the two younger ones being Anthony and Max. When their father announces that he's considering stepping down as head honcho off their delicatessen empire, the assumption is that Jace will take his place. However, Sherman Pickle, has something else in mind, and it throws his sons in for a loop. With each of them already owning a deli in different locations, whoever has the highest profits by the end of the year takes over the franchise and Manhattan Pickle. Jace may be first-born, but he's dead last at the start of the competition. He heads to Austin Pickle, hoping to see what the heck is happening. There he meets thirty-year-old Nova Strong who has no idea the guy she thinks is a new employee is actually her boss. This big pickle may be an undercover boss, but will Jace be slipping under the covers with Nova?

This was a joy to read, and I had no problem laughing as loudly as I was because, well, I'm stuck at home and no one is going to judge me--unless you count all my fur babies, who may or may not have been giving me either judgmental looks or the side-eye. There was so much to love about this book--from the original and hilarious story to its quirky cast of characters--that I honestly would be hard-pressed to come up with anything about it that I didn't like. The interactions between Jason--because I prefer him as Jason and not Jace, and I knot that sounds weird, but you'll understand what I mean when you read the book--and Nova were entertainment gold. Seeing these two main characters develop as the story moved forward was a treat, especially because it was clear that they had layers to them and there was more going on than you would have originally thought. They truly do grow as individuals as their own relationship evolves, making them go from likable to lovable, and making my emotional investment in them even more substantial. The pickle jokes and the rest of the Pickle clan were a hoot, and I don't know if JJ Knight will have books for Anthony and Max, but you certainly won't hear any complaints from me. Hint, hint. Big Pickle more than dillevered (snicker), snagging itself five stars, and has me craving even more this author. ♥