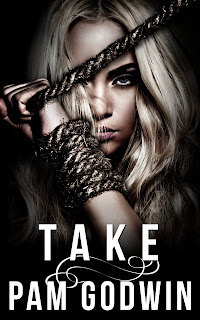 His eyes snapped open, sharpened, drilling into hers. “Need to tell you something.”

Her heart skipped. “You're insane.”

Desperate to keep him alert and talking, she leaned in and asked, “What do you love about me?”

“First off...” He lifted his unshackled hand to her face. “Everything.”

His eyes fluttered shut, and his arm dropped.

No one does dark romance quite like Pam Godwin, and she proves that once again with the release of Take, the fifth novel in her Deliver series. Getting taken once was bad enough; two times has twenty-two-year-old Kate frustrated and desperate. She's figured out who's behind her abduction—Tiago Badell, a man fifteen years her senior and known for his history of crime and violence. Tiago doesn't pretend to be anything other than the villain people recognize him to be. Kate knows she has to do whatever is necessary in order to survive. She may not have wanted to be taken, but being with him creates a bond neither of them anticipated but possibly unknowingly needed. He intends to mark her repeatedly as his, but it is she who may end up etched in his soul.

A word of warning: this series MUST be read in order. There are recurring characters as well as story arcs throughout the series. Also, this isn’t your mother’s romance, so if you’re looking for hearts and flowers, I suggest you read something else. Now, if you’d like to see if dark romance floats your boat, then I highly recommend you pick up the first book in the series, Deliver, which is currently available for free on a slew of e-retailers. Each book in the Deliver series centers on a different couple, so there aren’t any cliffhangers as far as the couples in each book is concerned.

As the series has progressed, Josh and Liv from the series starter have remained my favorites—and the still are! However, Tiago and Kate may have just tied them for that top spot. Yes, Tiago is a bad man and he makes no apologies for who he is. However, the more the person behind the reputation came to the forefront, the more you see past the man we only got glimpses of in the earlier books. And Kate? She was such a revelation here—a young woman whose experiences have made her stronger but still empathetic. Yet again, Pam Godwin has written an extraordinary story, an antihero worth loving, and a worthy heroine with such daring. I’m giving Take five-plus stars. ❤

Read my reviews for the Deliver series: