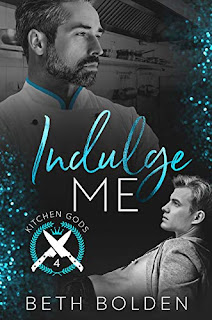 Beth Bolden wraps up her Kitchen Gods series with the much-awaited story of renowned chef Bastian Aquino and recent culinary school graduate and top of his class Kian Reynolds. If you're familiar with the series, then Kian's attachment to Bastian is something that's bugged the heck out of his best friends from the get-go. After all, with Miles Costa (Bite Me, book one), Wyatt Blake (Catch Me, book two), and Xander Bridges (Savor Me, book three) know firsthand the kind of terror Chef Aquino can be in the kitchen, so they don't quite understand why Kian refuses to leave the older man who didn't seem to appreciate him. The truth, however, is that Bastian has always taken notice of Kian, but as much as he felt for the man fourteen years his junior, he simply couldn't allow himself that luxury. Instead, Bastian pushed and prodded, wanting to ensure that Kian be the best possible chef he could be and live up to his potential while ignoring the promise of how good they would be together. But Kian is done allowing Bastian to control everything. If Bastian can't stand the heat they have, Kian may decide to get out of the kitchen where the man nicknamed the Bastard is god. Kian's done indulging Bastian and he's done waiting for him.

This was the book that I've been waiting for in this series, and Beth Bolden made sure that it was worth the wait. Just like Miles, Wyatt, and Xander as well as a slew of other people, I wasn't a fan of Bastian's and I couldn't fathom what it was that Kian saw in the monster, erm, I mean man to choose to stand by him personally and professionally. Naturally, I had a feeling there was more to Bastian than what we glimpsed of him in the first three novels, but I was still surprised to see that side of him that he kept under wraps. The man actively fought his feelings for Kian and restrained himself from acting on them, and goodness, but how Kian had the patience of Job, to the point that I was itching to see him finally take a stand. It's almost as if readers have this image of Bastian and Kian for three books, and then now that we know their story, I have a better understanding of who they are and what their relationship is like. This had a deliciously slow burn feel to it, and there's a this underlying thrum throughout the story, almost like I was waiting for one of them to actually pounce and make a stand. It's quite bittersweet to say goodbye to the series as a whole, but I'm thrilled it ended with a 4.5-starred read in Indulge Me. ♥

Read my reviews for the Kitchen Gods series:

Bite Me (book one) - three stars - My Review

Purchase Indulge Me on Amazon.