Release Blitz: When We Left Cuba by Chanel Cleeton 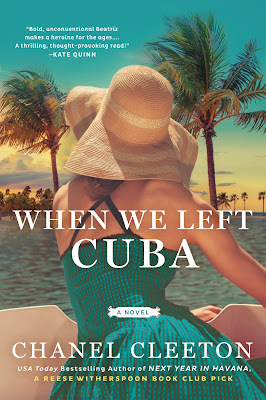 About When We Left Cuba
In 1960s Florida, a young Cuban exile will risk her life—and heart—to take back her country in this exhilarating historical novel from the author of Next Year in Havana, a Reese Witherspoon Book Club pick.

The Cuban Revolution took everything from sugar heiress Beatriz Perez—her family, her people, her country. Recruited by the CIA to infiltrate Fidel Castro's inner circle and pulled into the dangerous world of espionage, Beatriz is consumed by her quest for revenge and her desire to reclaim the life she lost.

As the Cold War swells like a hurricane over the shores of the Florida Strait, Beatriz is caught between the clash of Cuban American politics and the perils of a forbidden affair with a powerful man driven by ambitions of his own. When the ever-changing tides of history threaten everything she has fought for, she must make a choice between her past and future—but the wrong move could cost Beatriz everything—not just the island she loves, but also the man who has stolen her heart... 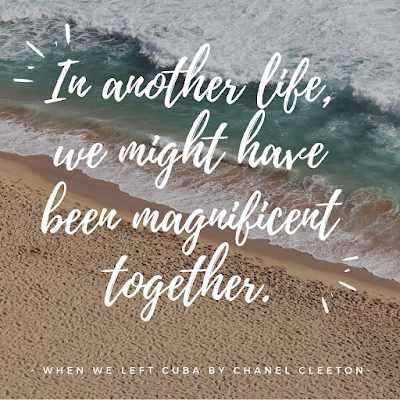 Read my five-starred review of When We Left Cuba.

Add When We Left Cuba on Goodreads.

Learn more about When We Left Cuba including downloading the book club guide and more at
http://www.chanelcleeton.com/when-we-left-cuba 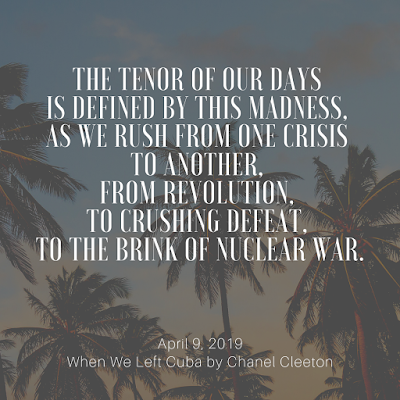 Praise for When We Left Cuba
A thrilling story about love, loss, and what we will do to go home again. Utterly un-put-down-able.
—PopSugar

A gorgeously atmospheric homage to a country and a past that vibrates with emotion on every page.
Historic events, espionage, and a Kennedy-esque romance make this novel a rich read,
but the addition of a formidable heroine truly makes it unputdownable.
This is not just historical fiction, but also an unrequited love story for a country and a way of life,
as well as a journey of self-discovery for a woman torn between love and the two countries she calls home.
—Karen White, New York Times bestselling author

Cleeton once again delivers a masterful tale of political intrigue tinged with personal heartbreak.
Her ferocity and fearlessness can be found on every page, and Beatriz’s story
—one of vengeance, betrayal, and bravery—astonishes and thrills.
—Fiona Davis, national bestselling author of The Masterpiece

Atmospheric and evocative, When We Left Cuba captivates with its compelling portrayals
of the glamorous Cuban exile community and powerful forbidden love
set against the dangerous intrigue of the Cold War. Unforgettable and unputdownable!
—Laura Kamoie, New York Times bestselling coauthor of My Dear Hamilton

By turns a captivating historical novel, a sweeping love story,
and a daring tale of espionage—I absolutely adored this gem of a novel.
—Jillian Cantor, author of The Lost Letter and In Another Time

Oozing with atmosphere and intrigue, When We Left Cuba is an evocative, powerful and beautifully written historical novel which had me completely captivated from the first page to the last.
Take a bow, Chanel Cleeton!
—Hazel Gaynor, New York Times bestselling author of The Lighthouse Keeper’s Daughter

With a sure hand for historical detail, an impeccable eye for setting, and a heroine who grasps hold
of your heart and never lets go, Chanel Cleeton has created another dazzlingly atmospheric
and absorbing story of Cuba and its exiles.
A beautiful and profoundly affecting novel from a writer whose work belongs
on the shelves of every lover of historical fiction.
—Jennifer Robson, USA Today bestselling author of The Gown

Powerful, emotional and oh so real. One woman's fight to reclaim her own country,
against all odds and no matter what the cost, is intertwined
with the real history of our lifetime and creates an unforgettable story.
—Rhys Bowen, New York Times and #1 Kindle bestselling author of The Tuscan Child and the Royal Spyness mysteries.

Scintillating…. An intriguing dive into the turbulent Cuban-American history of the 1960s,
and the unorthodox choices made by a strong historical woman.
—Marie Benedict, New York Times bestselling author of The Only Woman in the Room

Rich in historic detail, When We Left Cuba has it all—
the excitement of a page-turning thriller, the sizzle of a steamy romance
and the elegant prose of a master storyteller.
—Renée Rosen, author of Park Avenue Summer

Cleeton draws you into the glamour, intrigue, and uncertainty of the Cuban exile community
just after Castro's coup through a heroine who could give Mata Hari a run for her money….
You'll be rooting for Beatriz to change the course of history—and find her own hard-won happily ever after.
—Lauren Willig, New York Times bestselling author of The English Wife

With a richly imagined setting and a heroine worth rooting for from the start,
When We Left Cuba is thrilling and romantic, and timely to boot.
—Michelle Gable, New York Times bestselling author of The Summer I Met Jack

A compelling unputdownable story of love—for a man, for a country, for a past ripped away,
and a future’s tenuous promise. When We Left Cuba swept me away.
—Shelley Noble, New York Times bestselling author of Lighthouse Beach

Electric and fierce. Beatriz Perez’s romance with a handsome, important senator will sweep you away,
but it’s her profound loyalty to Cuba and her formidable determination to be her own woman
despite life-and-death odds that will really hold you in thrall.
—Kerri Maher, author of The Kennedy Debutante

In a tale as tempestuous as Cuba itself, When We Left Cuba is the revolutionary story
of one woman’s bold courage and her many sacrifices for her beloved country.
An absolutely spectacular read!
—Stephanie Marie Thornton, author of American Princess

Beatriz Perez’s brand of vintage-Havana glamour dazzles with equal parts intrigue, rebellion,
and romance to make for an unforgettable story.
—Elise Hooper, author of The Other Alcott 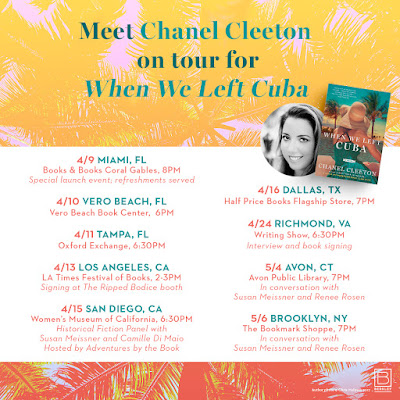 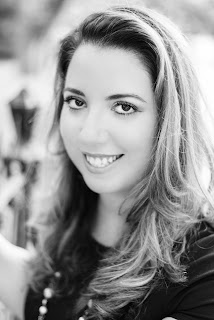 Originally from Florida, Chanel grew up on stories of her family's exodus from Cuba following the events of the Cuban Revolution. Her passion for politics and history continued during her years spent studying in England where she earned a bachelor's degree in International Relations from Richmond, The American International University in London and a master's degree in Global Politics from the London School of Economics & Political Science. Chanel also received her Juris Doctor from the University of South Carolina, School of Law.

She loves to travel and has lived in the Caribbean, Europe, and Asia.