Review: When We Left Cuba by Chanel Cleeton 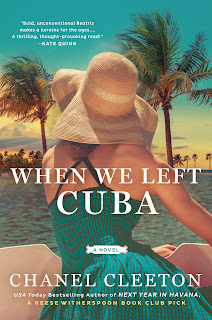 Chanel Cleeton is back with her latest standalone novel, the beautifully written When We Left Cuba, published by Berkley Books. This is the story of Beatriz Perez, an heiress who is forced to flee her home during the Cuban Revolution. Her family has re-established itself in US state of Florida, but Beatriz continues to long for the life she left behind in her home country and still mourns the loss of her beloved twin brother. When the Central Intelligence Agency approaches her in hopes of possible recruitment, Beatriz sees it as her opportunity to seek vengeance on everything that was taken from her and her family. Her task is to infiltrate the nearly impenetrable inner circle of revolutionary leader Fidel Castro, but as driven as she may be, it is a task that could prove insurmountable. With the Cold War looming, Beatriz is caught in the intrigue and dangers of Cuban-American politics and a forbidden affair. When things take a turn, Beatriz is forced to make a difficult choice, but while she may let go of the past she clings to, there are no guarantees of having a future with a man like Nicholas Preston III.

Even though When We Left Cuba is a companion novel to Chanel Cleeton's Next Year in Havana, it still reads quite well as a standalone. However, with the latter being an exceptional read, allow me to recommend that you add it to your to-be-read list as soon as possible. Cleeton exceeded my expectations, thanks to a well-crafted story that has romance and intrigue interspersed with a fair amount of drama and bits of humor. This was as much about love for one's heritage and family as it was about love for a significant other. Beatriz was a female main character who demands your attention for all the right reasons. That doesn't mean she's perfect; she's flawed but she's also someone who captured my fascination from beginning till end. While she and most of the characters in this book are fictional, the events that take place are not, and the author did a highly commendable job weaving the fictional with the historic, making one contemplate the possibility of something like what happened to Beatriz. I've loved seeing how Cleeton has developed as an author over the years and with each new release, she's shown that she can, indeed, top herself. When We Left Cuba gets five stars and ties Next Year in Havana is my favorite of Cleeton's. ♥