Review: Smoke in the Mirror by Aimee Nicole Walker (Road to Blissville #5) 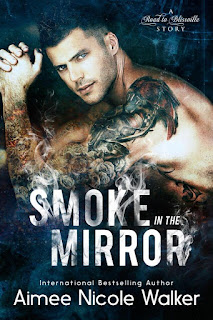 Even before Vinyl and Villains owner Memphis Sullivan and psychic medium Lyric Willows met, it almost felt as if they knew bits and pieces about one another. After all, Memphis was a fan of Lyric's show, The Paranormal Whisperer, and he was an active, albeit anonymous, member of a now infamous community of fans. When Lyric became friends with Memphis's cousin Emory and showed interest in investigating Bliss House--the home that once belonged to Blissville's founder Anthony Bliss and is now the home of one of Memphis's best friends--he learned about Memphis as well. Memphis offering Lyric his extra room during his stay in Blissville was just his way of being welcoming, and while Lyric accepts said offer, it's clear that things may become complicated living in the same house with the person he's become quite attracted to. Maybe they can be "just" friends and Memphis could even help Lyric with his investigation. Lyric knows that Memphis deserves a good guy--someone who will cherish him the way he deserves to be; he may be in for a surprise when Memphis gives this bad boy a run for his money.

Smoke in the Mirror is the fifth novel in bestselling author Aimee Nicole Walker's small-town romance series Road to Blissville, and it's turned out to be one of my favorites so far. Memphis's crush on Lyric has always come off as cute in the earlier books, but there was definitely nothing cutesy when he and Lyric finally got together. There was heat and a whole lot of it. Well, okay, there were some truly cutesy moments between them, and then there were the really lighthearted ones that made me snicker like a school kid. Basically, what I'm saying here is that Memphis and Lyric had chemistry in spades and even as things between them intensified, it never felt stifling as far as a I was concerned. I loved seeing these two overcome their respective issues, especially Lyric whose back story made my heart squeeze in empathy for him. Memphis had found home in Blissville and Lyric had found home with Memphis. I also loved the mystery concerning Anthony Bliss and whether or not he really was the ghost haunting Bliss House. That was a bittersweet story in and of itself so total kudos to Walker. Smoke in the Mirror easily garners five stars. ♥

Purchase Smoke in the Mirror on Amazon.