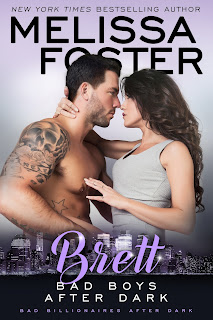 “You were never a booty call, Soph. You were always something more.”

Melissa Foster saved the best for last with Brett, the fourth and final novel in her Bad Boys After Dark series. Brett Bad is the lone brother who has yet to settle down, and he isn't exactly looking to do so either. He's never fathomed the notion of being with just one woman for the rest of his days, but maybe seeing his three other brothers finding love, companionship, and surprisingly, peace of mind with their respective women has him being more introspective. Maybe it isn't a coincidence, either, that he's been spending time wondering how to convince one woman in particular to take a chance on him, even if it is just for only a night. That woman is Sophie Roberts.

From the time she started working as Brett's eldest brother's legal assistant, Sophie has proven to be a woman unlike any other that Brett's come across. She doesn't give in easily to his flirting, and even though it's clear that she wants him as much as he wants her, she insists she isn't interested in what he has to offer. You see, Sophie's the kind of woman who wants--and deserves--the kind of man who can offer up the complete package: commitment, marriage, a home, and children. Brett doesn't want to make her promises he can't keep, but when she finally agrees to one night with him, why is it that Brett can't help but want another...and another...and more?

I seriously loved Brett and Sophie! They both knew what they wanted, and they were both willing to push beyond their comfort zone in order to get it--each other. While it may have seemed that their ultimate goals were different in the beginning, it was all a matter of taking that chance because the other person and what they were potentially working towards was and would be worth it. Any changes or adjustments made were not merely FOR the other person, but by the end, it was also what was best for them as individuals and a couple. Foster highlighted the importance of love and forgiveness for one's self, for their partner, and within one's family. Five-plus stars for Brett. ♥

Read my reviews for the Bad Boys After Dark series: