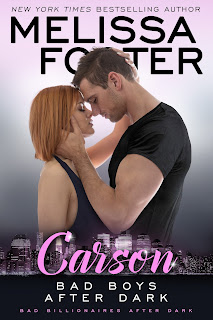 Carson is book number three out of an expected four in the Bad Boys After Dark series penned by Melissa Foster and it's a second chance love story between Carson Bad and his college...well, not-really-sweetheart, Tawny Bishop. Carson and Tawny may have seemed like an unlikely pairing for a period of time when they were in college, not that Tawny ever really thought of them as an actual couple, but when they were together, they whetted their kinkier-than-the-norm sexual appetites. But then Tawny abruptly ended things, throwing out the flimsy reason about another woman. She went on to marry and Carson went on to make billions. But being married has opened Tawny to certain realizations. It may have taken her ten years, but Tawny is now seeking Carson out, to let him know why she left things the way she did a decade ago, and maybe, she's hoping for them to have another chance.

I love me a good second chance romance, but I'll be honest, I was a tad iffy with this third addition to a good series. Maybe it was because Carson Bad and Tawny Bishop had differing views on what kind of relationship they had back in college. Maybe it was because I wondered about Tawny's motives regarding reaching out to Carson. Maybe it was because Tawny was this confused person who still wasn't clear on the fact that what she wanted in the bedroom was abhorrent. I can't pinpoint one exact reason, but these two didn't totally click with me. I liked Carson, and yes, these two had good moments, complete with sparks and a fair amount of chemistry, but Tawny was not registering the way I would have wished a romance heroine did. There was just something missing when it came to her. While Carson was not my favorite one in the series, it still had certain 3.5-star worthy positive points. ♥

Read my reviews for the Bad Boys After Dark series: