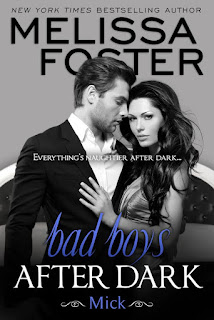 
The latest addition to bestselling author Melissa Foster's After Dark umbrella series is Bad Boys After Dark, which is about the four Bad brothers--Mick, Dylan, Carson, and Brett--all of whom continue to be haunted by the death of their only sister. For those of you who are familiar with the After Dark books, these are more erotic in nature compared to the other series and books that Melissa Foster has published and continues to publish. I enjoyed the first four books, Wild Boys After Dark, and have been looking forward to this second batch since the Brothers Bad were introduced in the prior series. Eldest brother Mick gets things rolling as the brooding lawyer decides to cross the line with the woman he's wanted but stayed away from four three years. But will one long weekend together be enough for Mick and Amanda?

Amanda Jenner is tired of being the prim and proper paralegal who plays by the rules but goes home lonely and in need of that something that her sister now has. She's read through a book that gives her a whole new set of rules she's excited to try out, and her first outing proves to be somewhat successful when she grabs the attention of man hidden behind a beard and a mask. Anonymity is key, with Amanda also donning her own mask and wig, but when things get hot and heavy and she speaks, the man knows right away who she is. He decides to hold off on giving them what they both want and arranges for a meeting the following night. Imagine Amanda's surprise when she figures out that the man who rocked her world the night before is none other than her boss, Mick Bad, the man who's starred in each of her secret fantasies.

Mick doesn't do relationships. Life has taught him that love doesn't last and that promises, no matter how hard one tries to make and keep them, can be broken. That doesn't stop him from dreaming of ways to be with Amanda, but a woman like that deserves more than he could ever give her. He doesn't believe in marriage and has no plans of ever having children. But when an encounter leads to an arrangement that will have Mick teaching Amanda what she needs to do to seduce another man, he gives in, allowing himself those few days to be with the woman he dreams of. As close as they get, Mick reminds Amanda--and himself--that there can be nothing more when they return to the city on Monday. Amanda has broken down his defenses, but will that be enough for him to finally admit that he's now ready to believe in more?

Someone hand me a fan already! From the moment Mick and Amanda get busy, they get busy, and that's with them hiding their identities behind masks. While anonymity may make everything seem more illicit, it's those encounters when they know exactly who it is making them feel things, both physically and emotionally, that heighten the whole experience for them. Things may have started out with Amanda needing how to learn to gain a man's attention, but it's Mick who learns to open himself up. This is indeed a steamy read, but don't doubt that there are sweet moments between the two, and those are the moments that capture your heart. Those last two chapters? Major love! There's a tiny introduction to who Dylan Bad will be paired up with, and December seems so far away! But do check out Mick, which gets four stars. ♥