Review: Unbreak Me by Maria Vickers 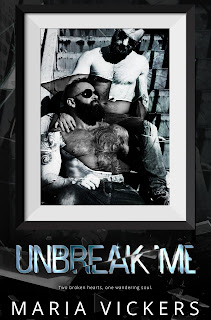 Unbreak Me marks my third read from Maria Vickers, and this time around, the story she's penned has a different feel to it compared to the first two I read from her--By the Book and Off-Campus Setup. Thirty-eight-year-old Memphis King and thirty-one-year-old Barney "Tex" Davis were about to celebrate their third anniversary as a couple when the unthinkable happens. Tex spends the next year lost and unsure if he even wants to move forward. When a job promotion is presented to him, part of the package includes a move from New York to Seattle. His family, as well as Memphis's own family, encourage to take the opportunity to start anew. But then life throws him a curve ball by the re-appearance of someone from his past--someone he never thought he'd see again: Memphis. Tex isn't sure how this turn of events has come to pass. Maybe Memphis's return is what Tex needs in order to truly let go of what they shared together and creates something else. But the more they're together, the more neither one of them is ready to part ways.

This was an interesting read, almost with a Ghost-like feel to it, Ghost being the highly popular 1990 film starring Demi Moore, Patrick Swayze, and Whoopi Goldberg and one of my personal favorites. The beginning of the book snagged my attention and my heart broke for what happened to both Tex and Memphis soon after we meet them. When Memphis makes his re-appearance, I had a feeling I knew how the story was going to wrap up--and I ended up being right--but a lot of what happened in between the beginning and the end managed to take me by surprise in a good way. This was a pretty fast-paced book, and both Memphis and Tex were likable and I enjoyed seeing how their story played out. There were some heartrending moments, but there were also lighthearted ones, especially when it becomes obvious that there was so much more to Memphis and Tex's relationship than what happened at the start of the book. Overall, Unbreak Me gave me some really good feels and is my favorite from Maria Vickers so far. 4.5 stars. ♥

Purchase Unbreak Me on Amazon.