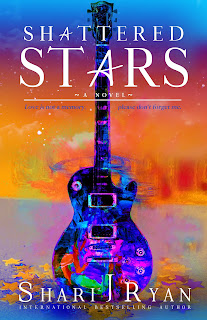 After her foray into romantic comedy via her Man Cave series, Shari J. Ryan latest standalone release takes her back to more angsty fare, which is also what she was writing when I first came across her writing a few years ago. Shattered Stars is a love story told in the present and through flashbacks. Danielle Caren was an eighteen-year-old single mother when she met Layne Hensen, and their connection was instant. Twelve years later and Dani and Layne are still together, but the life they've created is being threatened by one devastating diagnosis. The memories they've made are part of what bind them as a family, but what happens when those same memories disappear one by one? Layne wants nothing more than to save her; Dani wishes for anything but to saddle him with endless worries. She thinks he's already given up too much but he fears he hasn't done enough to protect her.

I tried to give a bit of detail without actually spoiling it for anyone who has yet to read the story. Like whetting your appetite and getting you all curious, and I do, indeed, think this was a good book worth spending a couple or so hours with. Shari J. Ryan did a great job with how she presented Dani and Layne's story. There are times where flashbacks interspersed with the present don't work all that well, but in this case, they were reminders for Dani on what she feared she was already forgetting as well as showing readers just how strong of a foundation her relationship Layne was on. The family dynamic between Dani and Layne and their now-teenage daughter, Aly, was  one of my favorite things about he book and something that I could absolutely connect with, given Aly's close-knit relationship and strong bond with Layne. It reiterated my belief that family isn't about DNA or shared bloodlines. There was more to this story than you're made to believe, and the fact that the writing was as strong as it was made this an even better read. Shattered Stars garners 4.5 stars and is now one of my top three Shari J. Ryan reads. ♥