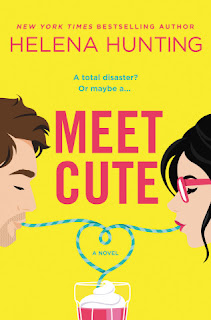 Coming up with a meet-cute to stand apart from the hordes of meet-cutes in romance novels everywhere, is a tough task, but Helena Hunting not only manages to do that with her newest standalone, but she's also gone an surprised me--and other readers--with the direction of her story. Meet Cute may be billed as a romantic comedy, and trust me, there was absolute zingers in this one, but this tale went beyond the fangirl meeting her celebrity crush and then went from maybe friends to ambitious rivals and then to long-standing enemies, at least on one side of the winsome twosome that headlines it. This certainly had humor, but it also had some major angsty feels.

Crashing into a hot guy is one thing, but when the hot guy turns out to be the actor from her all-time favorite television series--who also happens to be her favorite go-to celebrity fantasy--Kailyn Flowers goes from incoming law student with a plan to fangirl who can't stop gushing over former actor turned fellow law student Daxton Hughes. They become friendly rivals throughout law school, but then Dax betrays her right before graduation, causing Kailyn to cut any and all ties. Fast forward eight years from the time they met, and Kailyn's and Dax's paths cross once again. He can't quite understand why she seems to dislike his presence, but when tragedy strikes, he reaches out to her, and there's no way that Kailyn can turn her back on him. He's now the legal guardian to his thirteen-year-old sister, Emme, and Kailyn is her conservator. They can keep things purely professional. Can't they?

Cute. Yep, that was my immediate thought when I had reached the end of the book, but don't let the word fool you. Kailyn and Dax had the sort of love story that had a great deal of heartache to it, and I'm not necessarily talking about the romantic sort. They have missteps along the way to their happily-ever-after, but I couldn't help but cheer them on, even when I wanted to smack them both upside the head for those aforementioned missteps. This may sound weird but I liked that Kailyn and Dax had to do some work when it came to the rekindling of their friendship and, later on, their romantic relationship. Kailyn is no pushover. She's a woman with ambition, but she also happens to be someone filled with compassion, and she's easily become one of my favorite Helena Hunting heroines. I adored Dax, as well, and hooray for flawed heroes who fumble and stumble from time to time yet continue to get back up. As much as I loved them, there was one character who stole the spotlight repeatedly: Emme. Dare I hope she gets a book sometime in the future? Have your own meet-cute with Meet Cute. Five stars. ♥