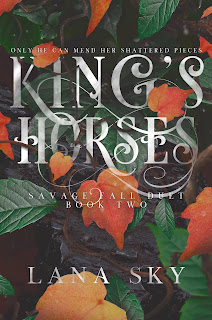 It's taken an hour or two to fully process my thoughts and feelings regarding King's Horses, the second book in the Savage Fall series by Lana Sky. You see, I quite liked the first book, King's Men, which was every bit the dark romance it was touted to be. So naturally, I had high hopes for book two; alas, I fear those hopes were too lofty because now that I'm done reading, I can't help but feel both disappointed and confused with how this turned out.

Blake Lorenz has finally gotten the revenge he's been seeking, so why does having broken Snowy Hollings make him feel even emptier than before? The possibility that Blake has made an error in judgment--that what he once believed to be true was actually...not--weighs on him. Snowy is left with close to nothing, but she's trying her best to stand back up and get her life back together. Blake may want her back, but someone has their eye on her, too.

Sigh. I really wanted to like this sequel. I mean, who goes into a book wanting to not like it, right? But this just lacked the romance that the first book had, and if I'm being totally honest, it simply wasn't up to par with its predecessor. And that ending? What the heck was that?! I swear, I had to blink a few times at the end and then scroll back to see if I had missed something, but nope. The end was abrupt and left me hanging. 2.5 stars for King's Horses. ♥

Read my reviews for the Savage Fall series: