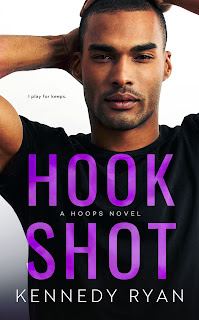 
Oh wow. This book... It was... EVERYTHING. And this series? It's so easy to peg it as a sports romance--and it does have the world of basketball as part of its backdrop throughout--but it also happens to be so much more than that. There's a reason why Kennedy Ryan was recently nominated for a RITA in the Contemporary Romance: Long category for the Hoops series starter, Long Shot, and its showcased throughout the rest of the books. See, this is what I love about Ryan's writing: she doesn't underestimate what her readers are capable of. The romance is in every single one of these books, but she never shies away from interspersing that with heavier subject matter, and I'm more than positive I'm not the only one who appreciates that. "Heavier" doesn't necessarily mean depressing, and trust me, this book has its fair share of lighthearted moments. Simply put, Hook Shot is one worthwhile read.

Kenan Ross is a veteran player in the league at thirty-six and he knows what it's like to win a championship twice over, but starting over with a basketball team that was originally seen as a bottom-feeder was a necessary thing. Being in San Diego allowed him to begin again but he was still a consummate professional on and off the court, the leader his team wanted, and the father his daughter, Simone, needed. With his ex-wife deciding to move to New York for a reality show with their daughter in tow, Kenan is spending the off-season there. When a fashion designer hopes to sign him as the spokesperson for a line of watches, all he expects to do is put in some time during a party. Fate, however, seems to have other plans because Lotus DuPree just so happens to work at the designer's atelier--the same Lotus that Kenan has thought about ever since he first met her. She may be eleven years younger, but Lotus feels like an old soul. She's made it clear more than once that she isn't interested in him, but Kenan believes that if she opens her eyes and heart to the possibility of them, he can show her that being together was inevitable.

I wish I had the right set of words to explain why this novel should be read by everyone. Kennedy Ryan has a gift and if you've never experienced it for yourself, then you are truly missing out. She's written this beautiful and wondrous love story between two people who have their share of hurts and heartaches, making them cautious and hesitant even as their hearts fervently insist that they're meant to be together. Their journey as individuals isn't easy, and they've already come a long way on their own, but it's their being in each other's orbit that allows makes it seem as if the missing pieces click into place one by one. Like the extra push needed to take necessary steps in order to be free from the shackles of the past came in the form of being together. I don't want to go into the details of the story, but suffice it to say that whatever expectations you may have--other than the author's flawless writing--need to be set aside. Whether you go into this blind or aware of the blurb, whether you've read all the previous books in the series or you're jumping into this one straightaway, whether you're familiar with Ryan's work or she's new to you, Hook Shot is one reading experience that should not be missed. In a saturated genre like romance, this novel--with its extraordinary tale and noteworthy characters--stands apart. Five-plus stars. ♥