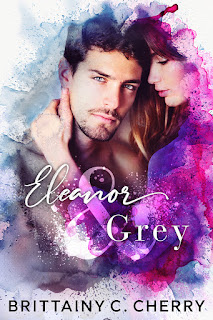 There are still three or four of Brittainy C. Cherry's books that I have yet to read, but she's already one of my go-to authors thanks to her heartrending stories. With her latest release, Cherry gives fans and readers a second-chance romance of sorts and if you're as addicted to angst as I am, then you'll be happy to know that there's a whole lot of it going on in Eleanor & Grey. If you aren't into angst but happen to appreciate excellent writing and heartfelt romance, I highly encourage you to pick up this novel and see why this author deserves the praise she's received.

Eleanor & Grey is the story of Eleanor Gable and Greyson East, who were sixteen and seventeen, respectively, when they first met. They shared a friendship that always felt like...more, but then Ellie moves away due to her mother's health and Grey closes the door on what they had. Fast forward over a decade and a half later, and Ellie has a new job as a nanny to fourteen-year-old Karla and five-year-old Lorelai, who just happen to be the daughters of Grey. Gone is the boy Ellie once knew, but maybe underneath all that pain hides the Grey she's never forgotten.

This book was a story of second chances, and that's not limited to just the romantic sort. Ellie was someone who experienced one of the deepest loses a person can have, yet she didn't stop living. On the other hand, Grey was still mourning the loss of his wife--and can I just say that I appreciated that the author made the relationship he shared with her one that was based on true love rather than going the more common route of making it nothing more than a marriage of necessity that ended based on betrayal? It gave the story a layer of believable complexity.

The push and pull that Grey was going through felt realistic, and how he wanted to put his daughters first was something I applauded. However, I did feel like Ellie was too much of a martyr, meaning she put EVERYONE and THEIR needs ahead of her own. Maybe I'm just overly cynical, but yeah, taking a stand and knowing that you deserve to be the one that people fight for and choose is important. I have no issue with Grey loving his wife and I believe he did love Ellie, but I'm still unsure if he loved them equally. Because of that, Eleanor & Grey gets 4.5 stars. ♥