Review: The DNA of You and Me by Andrea Rothman 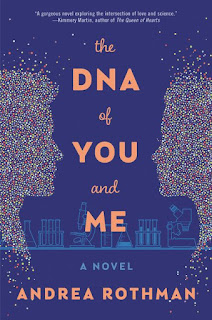 Note: A review copy was provided by HarperCollins Publishers.

I read a lot. A LOT. Naturally, that means I've come across books that share basic story lines, and I don't have much of an issue with that for as long as whoever the author is adds their own personal and creative touch to the story. In the case of Andrea Rothman's debut novel, however, readers get a wholly original tale that merges science with romance. We meet Emily Apell, a graduate student brought into a laboratory to do research on the sense of smell. There she meets Aeden Doherty, a scientist performing the same research as Emily. The two start off as competitors, and neither one is a slouch when it comes to wanting to be on top. Soon enough, though, Emily and Aeden forge a friendship, one that later leads into something far more. But Emily has always been someone ruled by research and rationale, and her burgeoning feelings for Aeden are something wholly new to her. When Aeden makes the surprising decision to leave the lab, Emily is torn. Does she listen to her head to continue working towards her life's dream or does she heed her heart and follow the man who's made her consider a new dream?

I love reading debut novels because it can turn out to be this awesome gift wherein I not only uncover a great story but also discover an author that I'll be keeping my eye on going forward. Andrea Rothman deserves kudos for putting forth a different kind of romance. The science aspect of it was somewhat fascinating, although I'll be perfectly honest and admit that I've never really been into science, whether as a student or someone many years past graduating from college. The romance part here is far more understated, and that isn't necessarily a bad thing. I liked Aeden because his presence in Emily's life both challenged her and pushed her beyond her comfort zone. Emily, in turn, was someone that took some getting used to. There were moments throughout the book where I felt disconnected, wishing that she were somehow more romantic than robotic. I'm not saying that Emily was someone who was cold, but she did have a tendency to detach, leading me to feel the same towards her. Overall, The DNA of You and Me won me over with its originality, but I did struggle a tad with Emily. This garners four stars. ♥

Purchase The DNA of You and Me on HarperCollins | Amazon | Apple Books | B&N | Kobo.