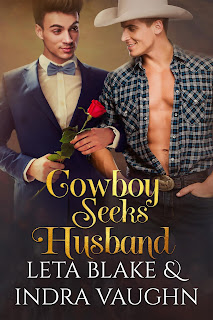 Note: An advanced reader copy (ARC) was provided by the authors via Signal Boost Promotions.

The Bachelor gets the queer treatment with a down-home ranch feel in the recent release from authors Leta Blake and Indra Vaughn. In Louisiana, Walker Reed's family-owned cattle ranch is in desperate need of monetary influx, what with a great deal of money being spent on necessary repairs just recently. Walker never expected, however, that his own family would insist that he participate in some matchmaking-type reality show where he would find a husband. Say what? But if this is what it takes in order to have enough money to save the ranch, Walker reluctantly agrees. All that stands between him and the money is a dozen men, and he can pretend to be into one of them to get it all over and done with. When it comes to Roan Carmichael, though, Walker doesn't really have to feign interest at all, not when he's so drawn to the man who's joined the show for the same reason. Roan needs the money for his ailing mother. So, while both Walker and Roan went into Queer Seeks Husband seeking some much-needed cash, but could they actually end up walking away from the show having found love and a happy ending?

I've read Leta Blake's and Indra Vaughn's solo work before and have had Vespertine, their first joint effort, sitting in my Kindle since it was available for free on Amazon back in 2017. I've enjoyed their books and heard good things about Vespertine, so when I learned about them writing together again, I knew I had to check out Cowboy Seeks Husband. Here's the thing: I've never watched a full episode of The Bachelor or any of its spin-off shows. I'm wary about reality shows that involve interpersonal (and by that, I mean PERSONAL) relationships. But hey, this is Leta Blake and Indra Vaughn we're talking about, so I still had high hopes and expectations. The book got off to a great and promising start, and I did feel like Walker and Roan had a good connection, but then everything seemed to slow down--painfully slow. There was drama out of nowhere, and as much as I love angst, this just came off as way more than I would have liked and unnecessarily so. The quality of writing was there, and the main characters were likable, but yeah, the book lost me at some point, and that made me sad. Three stars go to Cowboy Seeks Husband. ♥