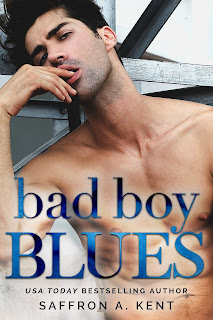 This is our first kiss.

We were made for kissing, he and I.

Bad Boy Blues isn't the first bully romance that I've read, and I doubt that it'll be the last, but it is, however, one of the more extraordinary stories that I've come across in recent years. I've read every single one of Saffron A. Kent's books, but this newest one she's released? Well, it's not only become my favorite from Kent, but it's now one of my all-time favorites and sits atop my list of top bully romances. That's saying something considering the book that used to occupy said top spot was my first-ever bully romance and it stayed up there for five years and nine months.

She was ten and he was twelve when they first met in detention, but theirs wasn't the beginning of a beautiful friendship. Instead, everything has led to today: nineteen-year-old Cleopatra Marie Paige and twenty-one-year-old Zachariah Benjamin Prince--the bullied and her bully. She was the girl from the south side who had hardworking and loving parents; he was the boy from the north side born into privilege and pedigree. He tormented her for years with his nonchalance and indifference, then he disappears for three years. Now, he's back, and this time, they aren't students in the same school. Cleo is a maid in his mansion, The Pleiades, and Zach is its prodigal master.

Was Zach a bully? Yes, he was, but I think what superseded his bullying ways were all those times he stood idly by when his friends bullied Cleo and she looked to him with some semblance of hope that he would put a stop to it all. The thing is, there's more to him than being a bully, and with every layer that's peeled back, there's a better understanding of how he's become the person that he is. That doesn't mean, however, that his bad behavior was excusable--nope, not in the least. His treatment of Cleo left a lot to be desired, BUT knowing his history does help see things from a different vantage point. And Cleo? She was a girl who stood her ground, refusing to play the victim, and as a kickass young woman, she came into her own more fully and refused to see other being victimized.

The development of the story and the evolution of Cleo and Zach's relationship are just among the many highlights of this amazingly penned tale of love and absolution. I don't want to go too much into the ins and outs of the story itself nor do I want to delve deeper into Cleo's and Zach's respective back stories. What I will say is that as adults, neither one of them were left unscathed by their experiences when they were younger, but their story is a reminder that you can either allow the wounds of the past to continue to fester or to bear the scars and learn from them. There were some significant supporting characters, but for all intents and purposes, this truly was Blue and her Dark Prince's story to tell and Saffron Kent told it with heart, heat, humor, and humility. Don't be surprised if you see Bad Boy Blues on my year-end list of top books. I'm glad I pre-ordered this fantastic novel. Five-plus stars. ♥