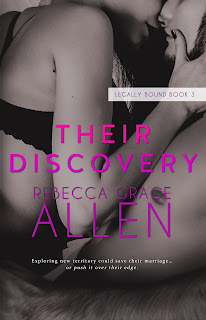 Their Discovery is the third novel in Rebecca Grace Allen's Legally Bound series. I absolutely loved the first book, His Contract, and the second one, Her Claim, was a highly likable follow-up read. On paper, book three had a lot of things that easily snagged my attention: she's a Domme-in-waiting, he's a sub-in-waiting, and they're married to each other. Because the first two books were such winners, my expectations were high for this third one, but unfortunately, it faltered more than it flourished, and that saddened me considering how I excited I was to read it.

Brady and Samantha Archer were very much in love when they exchanged vows. Over the years, they've created a family and a home, but the shine has definitely worn off. Sam doesn't feel as if Brady is pulling his weight when it comes to chores at home, and Brady wants nothing more than to bring the spark back in their marriage, but he fears in sharing his proclivities with his wife. When they begin to explore the BDSM lifestyle, Brady relishes submitting to his far more dominant wife in the bedroom, but will this prove to be enough to save their marriage?

Let me start off by saying I wasn't a fan of the "Jabba the Hutts" though Brady had in the fifth chapter of the book. Considering he seemed to be sensitive of his wife's own issues with her weight, having him think such a thing seemed so contradictory to everything else he had appeared to be. And yes, I'll say it: I found it to be offensive, and maybe the argument can be made that he never actually said it out loud to anyone, but body-shaming, whether it's done in your head or declared for anyone to hear, is body-shaming and it was simply a major turn-off.

Then there was the whole thing with Sam's issues with her own body image. No one ever said being overweight was a good thing, but there's a difference between pointing out that losing weight could be beneficial health-wise and simply pouring on the fat-shaming commentary. And while I did finish this book, I did so mostly because I hate slapping a DNF (did not finish) label on any of the books I read. Giving Their Discovery a three-star rating pains me because while I did like the Domme-sub angle of the story, the body-shaming killed most of the enjoyment for me. ♥

Read my reviews for the Legally Bound series:

His Contract (book one) - five-plus stars - My Review

Their Discovery (book three) - two stars - My Review (posted above)