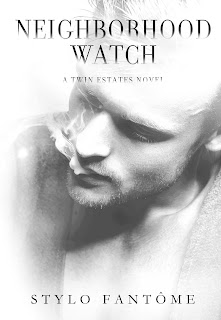 Stylo Fantôme’s Twin Estates series is back and it’s the best one in the lot! Neighborhood Watch gives readers the story of Landon Edenhoff and Tori Bellows, both of whom are familiar supporting characters in the series, what with Landon being Liam’s bad boy twin brother and Tori the assistant manager of The Garden, Liam’s club. Tori has had a thing for her boss for quite some time, but it’s pretty obvious that he was looking for sex—and ultimately, love--everywhere except right in front of him. She knows she should find someone more deserving of her affection and attention, but maybe all she has to do is give him a taste of what he’s missing. The person who ends up tasting what Tori’s got to offer, however, may look like Liam, may sound like Liam, but ultimately, is NOT Liam. But even after that awkward moment, Landon may prove to be a surprise that Tori never expected—and she’s one he never planned for either. Landon may not have been the Edenhoff Tori was crushing on, but the more they're in each other's orbit, it's becoming clearer that he could very well be the Edenhoff that may either complete or break her.

When it comes to antiheroes, we’re always looking for that one thing that signals that there’s something redeemable about them. Landon may be the dark to Liam’s light, but he wasn't some nefarious character intent on harming those around him. The guy has a history that's made him into the man he is when he and Tori become involved, but you can sense that at his core, he isn't as bad as people either make him out or perceive him to be. He's actually a nice guy beneath the tarnished veneer. Of course, it helps that he's paired with Tori, who isn't the type of woman that's easily pushed around, Landon's asshat persona is tamped down, enough that he becomes likable (well, at least in my eyes) in the story. He had his demons and they weren't exactly the kind that can be magically fixed or simply swept under the rug. While I loved the evolution of Landon's character, though, it was Tori who was a true standout, and that's a big deal, especially considering that I'm far more critical of female main characters. She was the heart of this book--a resilient woman who refused to be beaten down. Neighborhood Watch gets five stars. ♥