Review: The Consequence of Rejection by Rachel Van Dyken (Consequence #4) 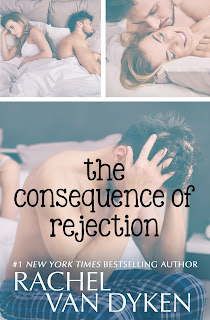 I almost hadn't survived leaving him. How in the world was I going to survive this? Doing it again? Only this time, I would be the one begging him to stay, and Jason Caro—the man I'd always loved—would be the one walking away.


We finally have Jason's story!!! Woohoo!!! Yup, I'm one of those Consequence series fans that's been anxiously awaiting Jason's happily-ever-after ever since the guy's scheduled nuptials imploded the way they did in the first book, The Consequence of Loving Colton. Then we saw where his quest for vengeance led to in The Consequence of Revenge, and how he aided and abetted his friends in The Consequence of Seduction. Now, it's all about Jason and how love can be lovelier--and may potentially lead you to the loony bin--the second time around in The Consequence of Rejection. The crew's still alive and kickin' ass, namely Colton and Milo Mathews (Colton being Jason's best friend and Milo his younger sister), Max and Becca Emory (Max being the font of bad ideas with an occasional stroke of genius and Becca the woman who will stroke anything except her husband's ego), and Reid and Jordan Emory (Reid being the guy women can't resist and Jordan the woman who keeps his world on an even keel). Now that I've reminded you who the Consequence main players are, on to Jason's story!

If you've read the series, particularly the series starter, then you know who Jason is, and while this book of his is a second-chance romance, it has nothing to do with the woman he was supposed to marry in the first book. Let's take a minute to thank Max for putting a stop to that potential debacle right there. Tick, tock, tick, tock. Okay, a few seconds will do. Max doesn't need his head getting any bigger than it already is (but I still love you, Max!). Anyhoo, before Jason was all set to marry in book one, he was actually in love with his best friend back in high school. He had his dreams of spending the rest of his life with her and foolishly believed she shared those dreams...until she upped and left him after they graduated from high school, riding off with one of Jason's close friends. Fast forward ten years later, and Maddy Summers is back in the hometown she ran from, all her own dreams...gone. Now, she's back in her family home, the one that sits beside that of the Caros. She rejected Jason a decade ago, but she's loved only him. This time around, will Jason be the one to reject Maddy?

Do Jason and Maddy still love each other even after everything that happened ten years prior to them seeing each other again? You betcha, but it isn't as simple as them admitting their feelings and how no one else has ever come close to how they felt when they were together. These two had issues that they had to deal, the biggest one being, of course the fact that Maddy left Jason a decade ago. They're not the same people they were as teenagers. Rachel Van Dyken could have added a host of complications to their situation to draw this whole thing out, but thank goodness she didn't because what they had on their plate was quite enough for any couple to have to deal with. That's where the angst comes in, but let's not forget that this book--and the series as a whole--is a romantic comedy, and Van Dyken more than has The Consequence of Rejection living up to the lofty expectation the three before it set. No one has made me laugh quite as much as the Consequence crew, and so it's bittersweet that this series is wrapping up, but my, oh my, what a way to end this all. Five-plus stars! ♥

Read my reviews for the Consequence series:

The Consequence of Loving Colton (book one) - 4.5 stars - My Review

The Consequence of Revenge (book two) - five stars - My Review

The Consequence of Sedution (book three) - five-plus stars - My Review

Purchase The Consequence of Rejection on Amazon.